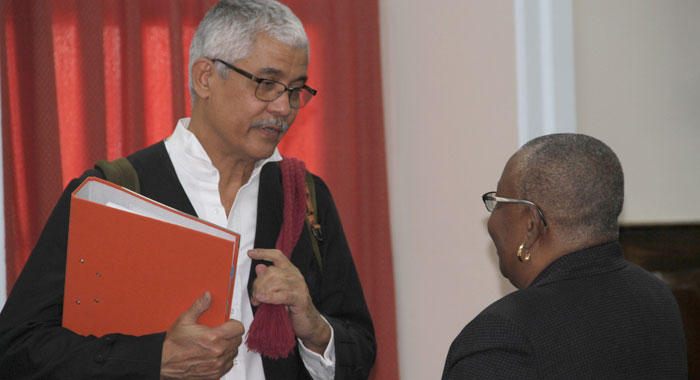 The respondents in the election petitions matters are slated to continue on today (Wednesday) to present their arguments against an amended motion by the petitioners seeking permission to inspect the ballot boxes used in Central Leeward in the December 2015 general elections.

The hearing relates to the petition that Benjamin Exeter, the main opposition New Democratic Party’s (NDP) candidate in Central Leeward, has filed challenging the results in that district.

Exeter’s is one of two petitions, the other having been brought by Lauron “Sharer” Baptiste, who was the NDP’s candidate in North Windward.

The Central Leeward seat went to the ruling Unity Labour Party’s (ULP) Sir Louis Straker, while Montgomery Daniel, also of the ULP, won the North Windward seat, according to the official results.

The ULP won eight of the 15 parliamentary seats — a repeat of the 2010 results – to secure a fourth consecutive term in office.

Exeter’s legal team has filed an amended motion seeking permission to inspect the ballot boxes and other election documents.

After his court appearance Tuesday, Queen’s Counsel Stanley “Stalky” John, lead counsel for the petitioners, summarised for iWitness News the arguments he had presented to the court.

“We are asking for inspection of the ballots in all ballot boxes and we endeavoured to give the court an overview of the critical issues in the substantive petition, which is, in brief, that there were many irregularities but particularly, that the ballots were defective and as a result of the defect in the ballots, they were invalid,” John told iWitness News

“And if the ballots are invalid, the law says that in those circumstances, they should not be counted and the election was not conducted in a manner substantially in accordance with the law as to election or that the result of the election was affected by these defective ballots,” he further said.

“That is the basis on which we are asking the court to allow inspection of the boxes to confirm and verify what we have already indicated through the photographs exhibited.”

In his response to John, Senior Counsel Douglas Mendes, a lawyer for the respondents, outlined to the court the principles under which inspection of the ballot boxes may or may not be granted.

He argued that if it can reasonably be concluded, based on the lack of evidence, that the petitioners have made allegation and is now coming to look for the evidence to do so, that would be a fishing expedition.

However, Mendes further argued, if there is evidence already or the evidence can be obtained elsewhere, there would be no need for inspection.

The petitioners say the purpose for the application is to determine if all of the original ballots were pre-printed with the official mark or stamped by the presiding officers and, in some instances, if the official mark was on the counterfoil.

Mendes told the court that it is a fact that ballots in polling station CLF do not bear the official mark and, therefore, inspection is not necessary because that is not in dispute.

The counsel said that the opposition alleges that some ballots look different. He argued, however, that this is not the purpose for which inspection is being sought.

In relation to the ballot boxes from CLF and CLF1, the petitions were seeking inspection “for a purpose that does not arise from the pleadings and therefore, inspection is not required and ought not to be allowed,” Mendes told the court.

He said that in any event, there is no evidence before the court on oath attesting to the alleged deficiencies identified by the respondents.

“So, in an event, M’lady, even if it was pleaded, there is no evidence so it is a fishing expedition,” Mendes told the court.

He said that on the question of the broader motion to inspect all ballots in all the ballot boxes, the petitions state that the purpose is that the ballots were pre-printed with the official stamp, were stamped by the presiding officer, or otherwise as the case may be, and, in some instances, had the official mark on the counterfoil.

Mendes, however, said that in the amended motion included are words that are absent from the petitions.

“So, so far, M’lady, you will see that the notice of motion is, in party, in any event, being used as a device to supplement the pleaded case or to try to amend it, in any event, by pleading things or by stating purposes of inspection that are not pleaded.

“But in any event, it is pleaded that all of the ballots were pre-printed with the official stamp, and, in some instances, the official mark was printed on the counterfoil.”

“More particularly, they rely on things that were said in affidavit in relation to the pre-petition application for inspection, which failed,” Mendes said, referring to the December 2016 application.

He said that in those affidavits the Supervisor of Elections, Sylvia Findlay Scrubb and another election official both suggested that the ballots had the official mark printed on the counter foil.

“So what is being suggested, M’lady is that the ballots came from the printer with the official mark already on them. And if that is so, M’lady, clearly that would be contrary to the rule 31 which requires the stamp to be put on when the voter approaches the presiding officer to get a ballot.”

He said that the issue that is being raised is whether those ballots arrived at the polling station with the official mark already printed on them.

He said that the petitioners were attempting to use the motion to give them more space in which to manoeuvre.

“… the motion is seeking more wiggle room, as it were, than the petitioner permitted himself in the petition,” Mendes said.

He said that if the court is generous and further inspection is granted, the petitioners can inspect the unused ballots.

“But, M’lady, there is no warrant for ordering inspection of the actual ballots with some many thousands of them—” he said, noting that the total number of ballots cast in Central Leeward was 4,681.