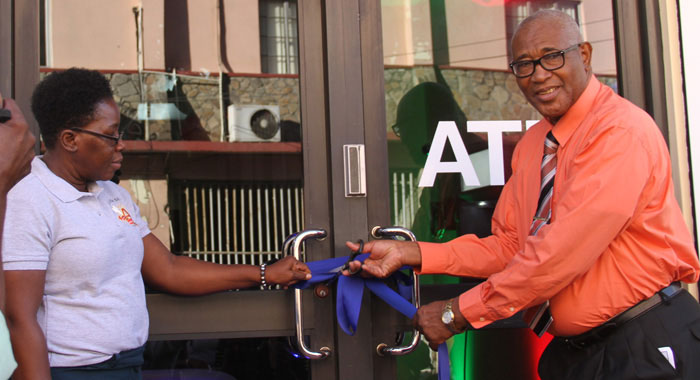 The St. Vincent and the Grenadines Teachers Co-operative Credit Union launch its automated teller machine (ATM) service on Monday at a ceremony at its headquarters in Kingstown.

At the TCCU ATMs, credit union members can deposit or withdraw funds from their special savings account, pay loans or mortgages, and check their account balances.

At BOSVG ATMs, members of the TCCU can withdraw funds from their special saving accounts.

She said the union’s goal has always been to offer its members better service than its competitors, adding that the launch of the ATM is a further step in bringing the credit union’s members the financial dignity they deserve.

She said impetus was given to the concept of an ATM when the union bought the CUMIS computer system to computerize its accounts in 1997.

The plans for having an ATM were later concretized when space for such a machine was included in the design of the union’s headquarters, which opened on Oct. 30, 2011.

And while the ATMs machines were installed in May 2015, there was another “curved ball” as the entity with which business was being done was installing and carrying out changes to the software that was previously offered to ensure the functioning of the ATM.

“Access 365” encompasses the union’s e-services, namely the online banking and ATM, and the soon to be implemented debit card service.