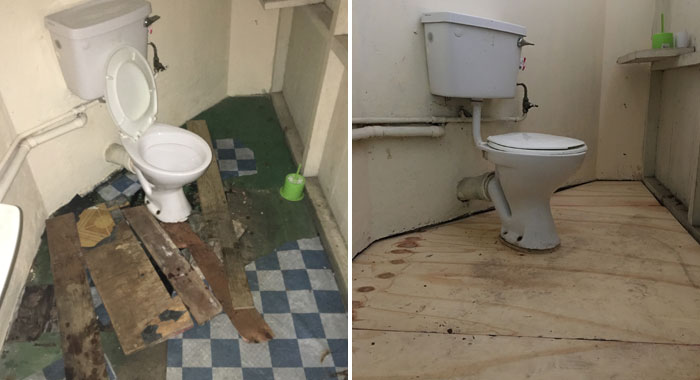 The restroom before and after the repairs. (iWN photos)

The dilapidated bathroom at the historic High Court building in Kingstown was repaired on Monday.

The repair came the first working day after iWitness News reported on the conditions there.

Pieces of board had been placed across a gap in the floor to make it possible for persons to safely use the toilet facilities.

The floor of the bathroom was repaired three calendar days after iWitness News published an article last Friday about a witness falling through the floor.

The witness, a former police officer, had showed the media the smudges on his trousers as a result of the incident.

He was also very grateful that he was not injured.

After the publication of the article, lawyer Kay Bacchus-Baptiste expressed surprised that the washroom was still in that condition.

She told iWitness News that she had told the Registrar of the High Court about the situation there in July after she (Bacchus-Baptiste) fell through resulting in scratches on one of her legs and thigh.

Some persons who come in frequent contact with the court thanked iWitness News for the article.

They joked that publication of the article had resulted in action, almost overnight, although they had been complaining for months.

But one court officer observed that repairing the floor might only be a temporary solution to a larger problem.

The restroom is located in a section of the building where the Search Room of the Registry used to be before it was relocated to another building in Kingstown.