Bottom feeding with the Palestinians 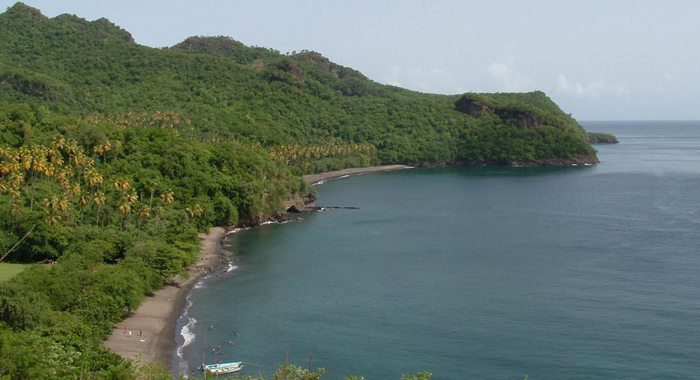 For those unaware of the meaning of the term “bottom feeding,” when applied to humans it is a metaphor for behaving like a fish or other animal at the bottom of the food chain that is forced to scavenge for scraps at the bed of a body of water. Metaphorically, a bottom feeder is a person or group surviving off whatever unsavory or leftover items are available.

This is part of my take on the visit to St. Vincent and the Grenadines (SVG) during the week beginning Dec. 3, 2017 of a “Palestinian” delegation headed by the chairman of the JMI Group, Jihad Mohammed, who together with other investors and Palestinian authorities, is said to be “involved in an important Tourism project at Mt. Wynne.”
What this “important Tourism project at Mt. Wynne” involves is anyone’s guess. Is it partnership with the Pace Developments Inc. Black Sands Resort and Villas project or is some totally new enterprise? And is there any truth to the persistent rumour that members of the delegation were offered Vincentian passports in exchange for these announcements (and in exchange for worthless “Palestinian” documents) made on a visit solicited by the Prime Minister, the Honourable Dr. Ralph E. Gonsalves?

Also, what is the current status of the Black Sands enterprise, apart from the regrowth of bush that was cleared in March?

The bottom feeder analogy refers not just to our habitual tendency to suck up the dregs when it comes to mainland development projects (for example, the failed Ottley Hall shipyard and marina, the bankrupt Buccament Bay Resort, and the Black Sands project which is in the hands of virtually unknown investors with no Caribbean experience), or that we have never have more than meet-and-greet promotion stunts with renowned hoteliers like the owners of Sandals and Karisma Resorts, but because this latest announcement ironically involves the increasingly isolated and chronically penniless non-state called Palestine.

By ironical, I mean Palestine — a bottom-feeding place if there ever was one — now largely squatted on by people who only began calling themselves “Palestinians” in recent decades (https://www.iwnsvg.com/2014/08/18/palestine-and-the-palestinians-myths-and-realities/ ) — who Donald Trump just pushed under the bus happily ending their greedy attempt to gain statehood while their even more greedy Arab brethren refuse to share any of their 99 per cent of the Middle East and North Africa — is now our best friend.

Palestine, a name given to the region by the Ancient Greeks and Romans, whose Moslem Arab inhabitants only recently manufactured a non-tribal, non-clan national identity as “Palestinians,” is far poorer (with one-sixth of our per capita GDP) and far more corrupt than our little slice of paradise. These are our new benefactors.

No irony there but lots of hypocrisy: while we post-Columbian descendants of immigrants are the inheritors of the British ethnic cleansing of the founding Kalinago people, our official support of the “Palestinians” is a repudiation of the intrinsic rights of the founding people of the Promised Land who have a Biblical title dead (Genesis 15:18-21; Numbers 34:1-12), a wealth of archaeological support, and the reaffirmation of over 3,000 years of history by the United Nations in 1948, all sanctioning the right of the legitimate descendants of Abraham (i.e., through his legal wife, Sarah) to declare Jerusalem as the one and only capital of the Jewish homeland.

Hypocrisy joins fantasy in the promise of 10,000 new jobs over the next three to five years via JMI Group investments, a windfall surely rooted in the construction of an international airport at Argyle. Those who would argue that such investment is going to be made by JMI, not by the impoverished “Palestinian” Authority, should visit the company’s web site (http://www.jihadmohammad.com ) where they will discover that most of the projects listed, none of them outside the Middle East, are in the earliest stages of conception.

Equally preposterous is the claim of our “Palestinian” guests that its intended investments are because, “SVG supported the just cause of the Palestinian people over the years.” This would mean that a few symbolically meaningless votes of support at the United Nations, a body where 136 of 193 member states (71 per cent) currently support Statehood for Palestine, is sufficient to guarantee the investment of tens of millions of dollars in unknown projects in just one of these 136 states. How credible is that?

Still, there is a thinly veiled reality behind the JMI Group visit. It is called electoral vote fishing, a potentially risky and notably cynical endeavour which generally seems to fool enough bottom-feeding gullible voters, even in countries far more enlightened than ours, to assure political victory based on the improbable dream of a big catch. In our own case, add to this the hearing of the 2015 election petitions less than a week after the JMI announcements, and the true purpose and reality of the unexpected arrival of our “Palestinian” comrades become perfectly clear — a ballot box insurance policy in case the petitions (a fishing expedition in its own right, according to its detractors) are successful.

This is the 67th in a series of essays on the AIA folly. My other AIA essays are listed below:

17 replies on “Bottom feeding with the Palestinians”