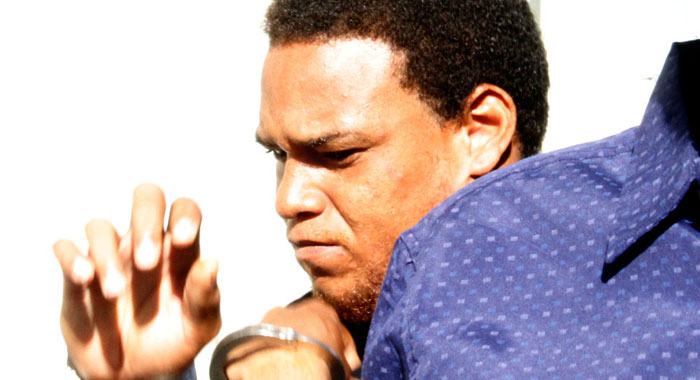 But Devon Ashton, 28, of New Montrose, watched as the witness, Kimron Thomas, 25 of McKies Hill denied that he had thrown the gun for which Ashton was charged, out of the motor vehicle PH520 on Aug. 21, 2017, as Ashton had claimed.

Ashton was found guilty of possession of a .38 pistol, serial number 3624, and one round of .38 ammunition.

At his sentencing two days later, Ashton was sent to prison for three months for the ammunition and four and a half years for the firearm.

The sentences will run concurrently. This means that Ashton will serve half-year less than Thomas, who was on Aug. 23 sentenced to five years in prison for possession of one black Luger 9 mm firearm, serial number S4M97, without a license at the Criminal Investigation Department general office in Kingstown on Monday, Aug. 21,

He was sentenced to two years in prison for possession of six rounds of 9mm ammunition without a license on the same date and place. Those sentences are running concurrently.

Ashton and Thomas were among four men who were arrested in the vehicle in Rillan Hill about 8 p.m. on Aug. 21 as the vehicle was travelling from Barrouallie to Kingstown.

The other occupants of the vehicle were Roberto Blackette and Jeremy Blackette.

Ashton, in his evidence in chief at the Serious Offences Court in Kingstown on Monday, denied being friends with the men, but said he had known them by seeing them for about five years.

The Crown’s case was that Station Sergeant of Police Dwuane Bailey along with other officers from the Special Patrol Unit, acting on information, set up a roadblock at Rillan Hill, where they conducted stop and search of vehicles and their occupants.

Bailey told the court that on seeing the vehicle, he signalled it to stop and Ashton threw a gun through its sunroof.

The senior police officer retrieved the weapon and arrested the men.

The occupants of the vehicle were taken to the Criminal Investigations Department in Kingstown, where a firearm was discovered in Thomas’s crotch.

In his defence, Ashton told the court the court that he was sitting in the rear seat of the vehicle, behind the driver.

He said that when the police officers signalled the vehicle to stop, Bailey shone his flashlight inside and said, “That is Devon f***ing Ashton?”

He said the occupants of the vehicle were placed to lie on the floor and were patted down.

A female officer who had shouted, “gun! gun!” as the vehicle was coming to a stop, came and showed them the firearm, Ashton said, contradicting Bailey’s evidence.

Ashton told the court that it was Thomas who had thrown the gun from the vehicle.

He further said that Thomas was outside the court waiting to testify — suggesting that Thomas would testify to that effect.

Ashton told the court that there was a streetlight in the area of the police operations but it was coming on and off.

He told the court that he did not have a gun nor did he throw a gun from the vehicle.

During cross examination by Senior Prosecutor Adolphus Delplesche, Ashton told the court that he could not recall if the streetlight was on during the time that he interacted with the police.

The accused man further told the court that he was not paying for his transportation to Kingstown.

He said it was a female officer who had shouted “Gun! Gun!” and who had gone in search. Ashton told the court that when the female officer returned empty handed, Bailey went and came back with a gun, saying he had found it.

In his testimony, Thomas, the defence witness, said that Bailey was coming toward the vehicle and when he almost got to it, a female officer told him that she had seen something resembling a gun being thrown out of the vehicle.

Thomas, who was sweating in the air-conditioned courtroom, told the court that when the female officer did not find the object, Bailey went and returned with a gun.

He said the police officers put all of them to lie on the street then said, “That gun has to be that man gun”  — referring to Ashton.

Thomas, who was sitting in the back seat of the vehicle along with Ashton, said he couldn’t say he could not say who threw the gun out of the window.

He also told the court that he did not throw the gun out of the window.

The prosecution declined the opportunity to cross-examine the witness.