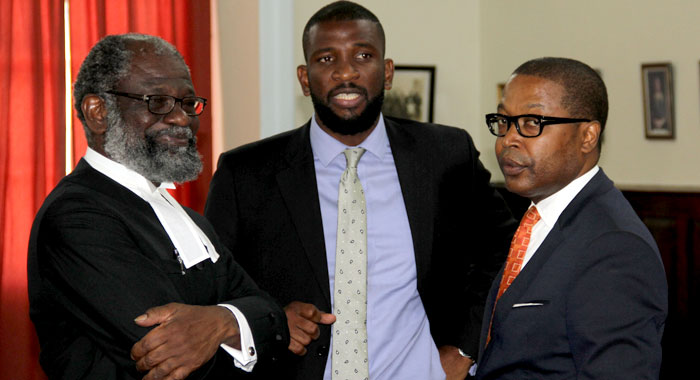 Lead counsel for the petitioners in the election petitions lawsuits, Queen’s Counsel Stanley “Stalky” John, told the High Court on Wednesday that a question by the judge proves that his client has evidence in the matter and is not engaging in a fishing expedition.

The respondents have claimed that the petitioners should not be allowed to inspect the ballot and other documents used in the Central Leeward district in the December 2015 general election.

The main opposition New Democratic Party’s candidate for Central Leeward Benjamin Exeter, as well as his North Windward counterpart, Lauron “Sharer” Baptiste, have each brought a petition challenging the results of the election.

Exeter’s legal team has filed a motion asking the court’s permission to inspect the ballots and other election documents used in Central Leeward.

The respondents have presented a number of legal arguments in opposition to the motion; saying that in some cases, the petitioners already have the evidence needed and should not be allowed inspection.

They have, however, argued that as it relates to some polling stations, the petitioners have no evidence of wrongdoing and should not be allowed to inspect the ballots.

On Wednesday, at the end of two days of hearings in the matter before Justice Esco Henry in Kingstown, John said that his client has presented the court with prima facie evidence and should be allowed to inspect all ballots used in Central Leeward in the 2015 general elections.

John told the High Court on Wednesday that that evidence is contained in Exeter’s affidavit.

“He had two-fold. What he saw is direct, eyewitness evidence in relation to the provisions of section 31(2). So that aspect, that element, in our respectful submission, is met,” John argued.

“And that aspect, that element is met as to the law that, M’lady, that impacts that. The situation was that the presiding officers had no option, no discretion as to how they should treat with the ballots when they were returned to them. The presiding officers were obliged … [to reject them],” he said.

John cited Rule 31(2), which says that the voter, on receiving the ballot, should proceed to the voting area of the polling station and there, secretly mark the ballot paper by making a cross with the black lead pencil provided.

The law further says that the voter shall then fold the ballot paper so that the initials of the presiding officer and the official mark can be seen without opening the ballot – and thereby violating the secrecy of the voter, John further said, quoting the law.

“So the presiding officer is obliged, under the law, not to open it, but he must still be able to see the stamp and the initial,” John commented.

The opposition is contending that some ballots were faulty in design and had no space on the ballot for the official mark and the initials of the presiding officer.

Further citing the law, John said that the voter must hand the ballot paper to the presiding officer who shall, without unfolding the ballot paper, ascertain by examination of the initials, and the numbers and the official mark thereon, that it is the same paper as that delivered to the voter.

“Now, Mr. Exeter just didn’t say purely from his observation. He also brought a copy of the ballot paper, showing exactly where the stamp is,” John said, in an apparent reference to photographs of ballot papers submitted as part of Exeter’s affidavit.

“If the presiding officer is obliged, must deal with that ballot paper–” John was saying when Justice Henry asked him if he was addressing the law or the facts.

Under the court rules, John could only at that point in the hearing respond to points of law raised by counsel for the respondents, as John had already presented his case to the court.

“It is M’lady, the law, because this particular –“ John was saying when he suddenly stopped speaking.

He continued shortly after: “But you know, M’lady, that’s a very interesting question that you asked because what that indicates clearly is that the information that we are dealing with here are facts. So that is factual evidence that is before the court.

“If I am not permitted to address this, it must be because it is facts, and so that is evidence. And to say that there is no evidence and that the court should draw an inference that this is a theory, M’Lady, it doesn’t add with the impression or with the character of the provisions there, because those provisions are contained in the law and they are also in Mr. Exeter’s affidavit, so those are facts,” John said.

He added: “And that, we say, constitutes prima facie evidence. When you put it together with the ballot, that indicates exactly factually what the state of play is and the question is, whether or not, on a balance of probabilities, the court has before it evidence that it may say, prima facie, would lead to the result that the presiding [the] officer would have seen for whom the voter voted in 90 per cent of the ballots.

“And if, in fact, there is a situation, M’Lady, where that factual scenario occurred where 90 per cent of people who voted, the presiding officer would have seen their vote, that certainly, is a basis, in our respectful submission, on which to say that the election was not conducted as a secret ballot and therefore, it was not substantially in compliance with the law.

“That is the basis of our submission there, M’lady. And that being the case, it is for your ladyship now to decide … whether or not, on the basis of that evidence there might have been a situation where all of these ballots, were in fact, the secrecy was breached and therefore, whether or not this is sufficient on which to decide the merits of the petitions or whether to ensure that the court is left in no doubt or is placed in an even more reasonable position that the ballots can be inspected,” John said.

Justice Henry has reserved her judgement until January or February 2018.