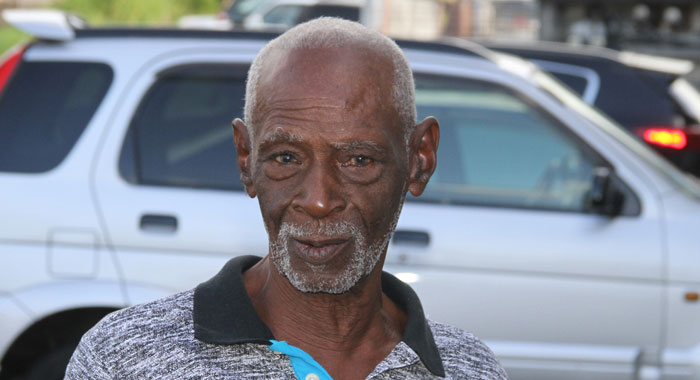 Raphael Patterson was arrested, spent a night in police custody and the charge against him was later withdrawn. (iWN photo)

The lawyer for the 76-year-old man against whom the prosecution on Monday withdrew a charge that he damaged a face basin at Argyle International Airport has asked whether his client should sue the government.

On Monday, prosecutor Carl Williams informed the Kingstown Magistrate’s Court that the Crown was not proceeding against Raphael Patterson on the damage to property charge.

William offered no explanation for the Crown’s decision, but it was widely rumoured that the prosecution was left with no choice because they have no evidence to substantiate a case against the man.

Patterson, who was born in St. Vincent but has been living in Trinidad and Tobago for 56 years, was arrested at AIA on Nov. 30 and charged with damage to property.

Information reaching iWitness News is that police had alleged that he used a rum bottle to damage a face basin at the airport, which began operating on Feb. 14.

iWitness News understands that Patterson was called up by security personnel at the airport after a bottle of rum was found in his luggage.

He is said to have told the security officer that since he could not travel with the liquor, he would like to dispose of it.

Patterson poured the alcohol down the face basin and reportedly left the security officer inside and went back to the departure hall.

About some 15 minutes later, he was reportedly approached by police who told him that he was being arrested on suspicion of damaging public property, iWitness News understand.

Patterson was initially scheduled to be tried last week Friday, but the trial was postponed to Tuesday because the magistrate was unavailable.

Information reaching iWitness News indicates that the police officer who investigated the matter told his superiors that there was not enough evidence on which to charge Patterson.

A source says that the Crown was concerned about how it would have been able to convince a court that a rum bottle — a glass object — was used to damage a ceramic face basin but the glass bottle remained intact.

Commenting on Facebook about the development, Patterson’s lawyer, Jomo Thomas noted that the charge against his client was dropped.

“There was not a shred of evidence against Mr Patterson as was reflected in the inability of the prosecutor to pursue its trial,” said Thomas, who is also Speaker of the House of Assembly.

“Mr Patterson is a 76 year old Vincentian who has lived in Trinidad for the last 56 years. He was arrested by the police and charged with damage to property. He was forced to sleep at the Stubbs police station. Should Mr Patterson sue the state for wrongful arrest and false imprisonment?” said Thomas, who has succeeded in a number of civil suits against the government.

2 replies on “Should man sue over airport face basin charge?”