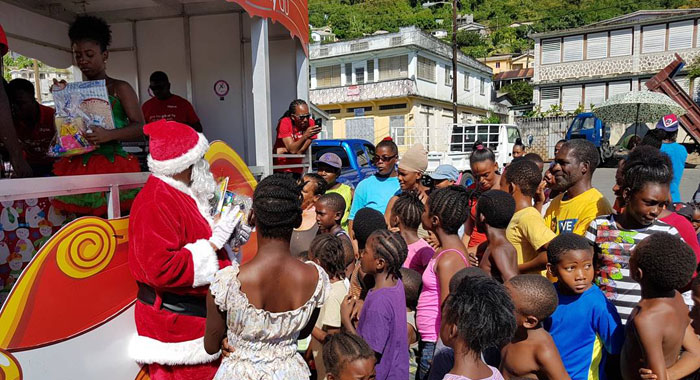 The Digicel Caravan took to the streets with members of staff, Santa and his helpers distributing over 700 gifts to children from Kingstown to Georgetown on Dec. 9.

The caravan made major stops in Calliaqua, Stubbs, Biabou, Byrea, Colonarie and Georgetown, allowing the overjoyed kids to meet, mingle and take pictures with Santa, while he presented them with gifts.

The gift distribution continued last Saturday on the leeward side of St. Vincent and saw the Digicel Caravan journeying as far as Barrouallie with stops for giveaways in Questelles, Pembroke, Buccament, and Layou.

Additionally, over 140 gifts were distributed during the week of Dec. 11 to the School for Children with Special Needs Georgetown, Kingstown and Bequia as part of the institutions’ Christmas celebrations.

Digicel’s Marketing Executive Jamisha Wright said while Christmas is viewed as a period for heightened commercial activity, it is also a very important time for Digicel to give back, particularly to the needy and less fortunate.

Wright added that seeing so many smiles on the faces of the kids as they received their gifts was most rewarding.