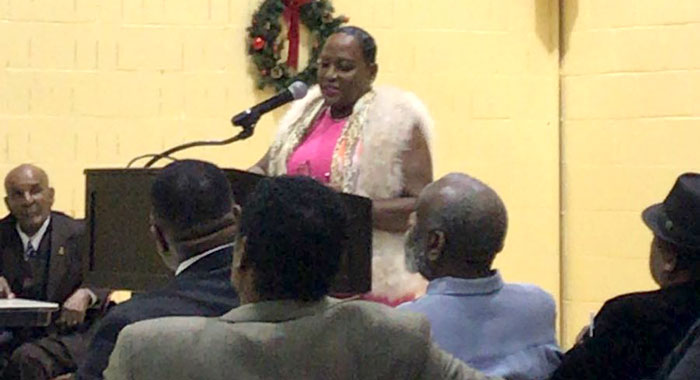 An opposition senator has suggested that the Vincentian diaspora be allowed to vote in general elections in St. Vincent and the Grenadines.

Kay Bacchus-Baptiste, a lawyer, made the suggestion at a town hall meeting held by her New Democratic Party in Brooklyn on Sunday.

It was her first major political speech since she was appointed a senator for the NDP, which is in opposition, last month.

She was at the time discussing electoral reform at the town hall meeting, which was also attended by NDP president and leader of the opposition, Godwin Friday, and Shirlan “Zita” Barnwell, who is also an opposition senator.

“I haven’t even discussed this one with the leader but I think the time has come for the diaspora to vote. What yo’ say? What yo’ say? We need electoral reform,” said Bacchus-Baptiste, a lawyer.

“It will not be easy, it would not happen for the next election, but listen to this, you know that Nigerians –Nigerians who just live for six months in St. Vincent can vote and you can’t? Is that fair?”

The laws of SVG allow Nigerians and other commonwealth nationals who have lived in a single constituency in SVG ahead of an election can register to vote in that election.

However, Vincentians who have not returned to their country for five consecutive years before an election are not permitted to cast a ballot in that election.

But Bacchus Baptiste said it is time for this to change.

“… because you prop Vincentians up, you love your country, that is why you are even having a town hall meeting here, and the several that you have had. So I think we should look at reforming our electoral laws to somehow allowing the diaspora to vote,” she said.

Among her suggestions for election reform was the removal of the embattled Sylvia Findlay from the post of Supervisor of Elections.

Findlay was elections chief during the 2015 general election, the result of which the NDP is challenging with two petitions, which are currently before the court.

“I do not think we should ever go back into an election with Sylvia Findlay as the supervisor of Elections. I think she has demonstrated her incompetence,” said Bacchus-Baptiste, a member of the NDP’s legal team that is challenging the petitions.
She also called for the abolition of the 15-day special registration period, which she said “is very dangerous because statistics show, and this is from a report of Sylvia Findlay herself, — that during that 15-day period, it is very onerous on the Electoral office, and it’s not new voters.”

He said that Prime Minister Ralph Gonsalves has said that the purpose for this is that last-minute voters who just turn 18 can register.

In its report on the Dec. 9, 2015 general elections, the Commonwealth observer team said it believes that “the 15-day special voter registration period does not allow adequate time for political parties, voters and concerned stakeholders to scrutinise the voters’ list, and make objections and appeals”.

The National Monitoring and Consultative Mechanism, a local body, also expressed concerns about the period, saying, that this period “leaves room for discrepancies in the registration”.

“This period saw a heightened registration of persons also with increased transfers. Some registering officers had to work way beyond scheduled times in an effort to accommodate those wishing to be registered or transferred,” the NMCM said.

Bacchus-Baptiste told the town hall meeting that during the last election, NDP agents had one voter’s list and the ULP agents had another.

“How could that be? So even when they gave us a list and we would check it to see who was on that list, you turn up on election day and the official list and the one which the ULP agents had had more voters on it. This is what happened in our election. So we have a lot to do to ensure that this must not happen again, that we must have free and safe elections in St. Vincent,” she said.

3 replies on “Senator wants diaspora to vote in SVG election”