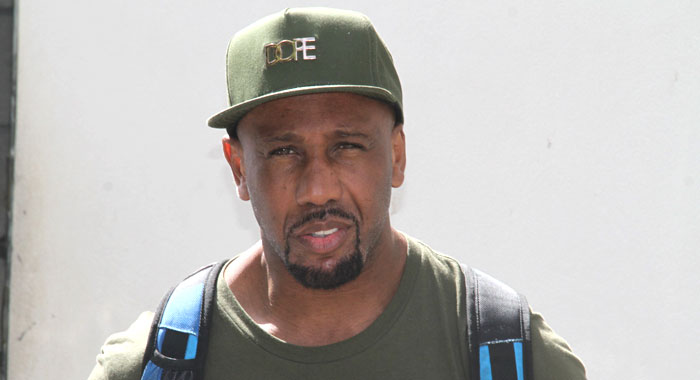 The accused, Robert Steele, outside the Serious Offences Court in Kingstown on Wednesday, after his arraignment. (iWN photo)

The trial of a man accused of having a round of 9mm ammunition in his suitcase at Argyle International Airport was yesterday (Thursday) adjourned to today (Friday), after the court heard the testimony of just one material witness.

Senior prosecutor Adolphus Delplesche asked Chief Magistrate Rechanne-Browne Matthias for an adjournment to consult with the Director of Public Prosecutions after hearing the evidence of Richard Burke, an aviation security supervisor at the airport.

Robert Steele of Villa and the United States, has pleaded not guilty to a charge that he had one round of 9 mm ammunition in his possession without a licence at the airport on Wednesday.

He was about to leave for the United States when the ammunition was allegedly found in his luggage.

At the trial at the Serious Offences Court in Kingstown on Thursday, Sergeant of Police Julian Cain, a weapons and ammunitions specialist, told the court that he had examined the round and ammunition and found it to be live.

Meanwhile, in his evidence in chief, Burke told the court that he was making checks at the various security points at the airport when the X-ray Check Baggage Room supervisor showed him an image on the screen of the x-ray machine.

He said the image appeared to be that of ammunition and as a result, he notified the police.

Burke told the court that he and the police officer checked the name on the suitcase and found it to be “Robert Steele”.

The police officer explained to Steele that airport security had made an observation regarding his luggage and that he was wanted at the Baggage Check Room and Steele complied, Burke said.

At the baggage search room, the police officer asked Steele if he had packed his suitcase himself and he said yes.

The police officer then proceeded to manually search the suitcase in Steele’s presence, but the source of the suspicious image was not found.

Steele then asked if he could re-pack his suitcase and he was given permission to do so.

Burke told the court that since the source of the suspicious image had not been identified, the suitcase could not be cleared for transportation on the aircraft.

After Steele had repacked the suitcase, it was opened and placed back onto the x-ray area, where the suspicious image showed up again.

Burke said that since the suitcase was opened, airport security was able to identify that area where the suspicious item was located in the suitcase.

He told the court that the round of ammunition was found in the pocket of a pair of jeans, located under a bottle of cologne and a pink sweater.

During cross-examination, Burke said that the X-ray Baggage Check Room is “very much” a secure area that is located behind the check-in counters, adding that the airport would have footage of the area.

He said that when the suitcase was taken back to the x-ray room, two police officers, he and two other airport security officers were there, but not the accused.

Burke said it was not practical for Steele to have gone into the x-ray room.

The witness told the court that the scanning area is not for the public as it is a highly secured area and is fitted with surveillance cameras.

Burke denied that after Steele had repacked the suitcase the first time that airport officials had told him that he was free to go.

He further said that when the round of ammunition was found, Steele did say that he did not know how it got there.

The witnesses further told the court that the accused man had said, “That is impossible” and had denied knowledge of the presence of the round of ammunition.

After hearing Burke’s evidence, Delplesche asked for an adjournment, saying that he had not had the time to go through the file and that based on the evidence under cross-examination, he would like to consult with the Director of Public Prosecution.

The trial was adjourned to 9 a.m. Friday morning.

Steele is being represented by Richard Williams.