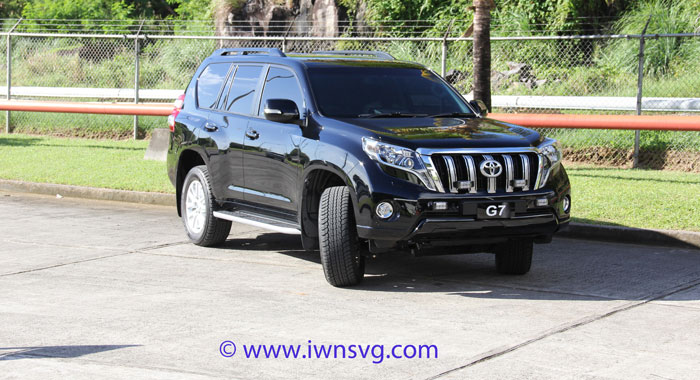 A resident of Prime Minister Ralph Gonsalves’ North Central Windward constituency has denied being reckless in his attempt to overtake the Prime Minister’s two-vehicle convoy between New Grounds and Diamond on Wednesday.

Kenson King, a Park Hill resident, said that if anyone was reckless in the encounter it was the driver of the prime minister’s security escort vehicle, which he said cut him off several times when he (King) attempted to overtake after ensuring that the road ahead was clear.

He told iWitness News on Thursday that the security vehicle, an SUV, took these actions even after he had honked his horns and used his indicator lights to signal his intention to overtake.

King, a corrections officer, told iWitness News that he was summoned to the office of head of the Traffic Branch, Superintendent of Police Kenneth John, on Wednesday and issued with a notice of intended prosecution for reckless driving.

John told iWitness News on Thursday that police have received and are investigating a report of what he said could amount to reckless or dangerous driving by King.

King told iWitness News that he encountered the prime minister’s convoy in New Grounds around 6:15 a.m. on his way to work at Her Majesty’s Prison’s in Kingstown.

He said the prime minister’s convoy, which he recognised by his official vehicle, G7, was travelling at a regular pace.

There was no siren, King told iWitness News.

“It is simply that I wanted to get to work,” King told iWitness News of his attempts to overtake the convoy when he thought it was safe to do so.

He, however, said that whenever he did so, the security vehicle would swing into the vacant lane and prevent him from overtaking.

King further told iWitness News that the security vehicle took the same steps in Biabou, where the road is especially wide between the bridge and the police station.

The man said that if he did not have good reflexes, he would have easily run into the back of the security vehicle.

He said he was only able to overtake in Diamond, about 30 minutes later, where the road has three lanes.

King, who is supposed to report for duty at 7 a.m., said he got to work late as a result of the action of the prime minister’s security escort.

King said that when summoned to John’s office, the senior officer asked him why he had tried to run the prime minister off the road.

King said that while he did not think that being accused of such a serious offence by a senior officer was anything to joke about, he laughed, “not in mirth but in cynicism”.

King maintained that he never acted in a reckless manner, adding that he had a passenger in his car who can attest to this.

“I was just trying to get to work. If they had sirens on, I would not have tried to overtake, because I would have known that they were in a hurry.”

King said that the police could not tell him if there were any laws that prevent members of the public from overtaking the prime minister’s convoy.

John, who was an outrider for Gonsalves for seven years, also told iWitness News that he would prefer if his superior comment on whether there are any protocols governing the interaction between other road users and official convoys.

King told iWitness News that he had spoken to a lawyer in light of the police notice of intended prosecution served on him.

In November, Gonsalves was injured as he was tossed about in his official vehicle when it braked and swerved to avoid crashing into a vehicle that had stopped suddenly.