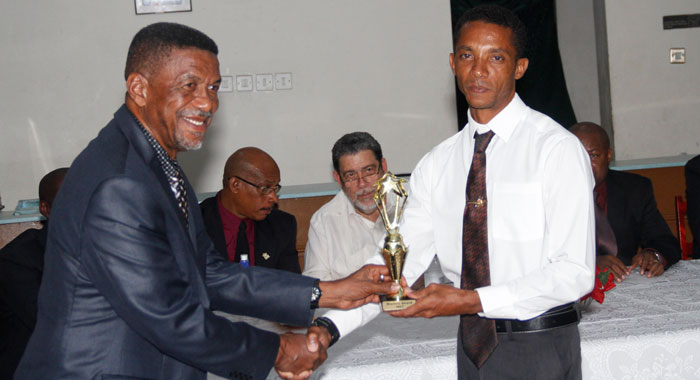 The Coast Guard diver who risked his life by taking a third dive in 130 feet of water to retrieve 20.2 lbs of cocaine thrown overboard from a vessel at sea, was last week Thursday, Dec. 28, 2017, presented with an award for bravery.

Petty Officer Lennox Williams, said to be the only qualified U.S. Navy First Class Deep Sea Diver in the English-speaking Caribbean, was presented with the award at the annual Police Awards Ceremony, which was held in Kingstown.

It was Williams who, during a police and Coast Guard operation off West Key, Bequia on July 3, 2014, retrieved the 9,159 grammes (20.2lbs) of cocaine from a go-fast vessel.

Union Island residents Harvey Benjamin and Vincent Denbar were last month, December 2017, found guilty in the High Court of possession of 9,159 grammes (20.2lbs) of cocaine with intent to supply and one count of drug trafficking each, in connection with the find.

They are awaiting sentencing.

The citation read at last week’s awards, said that, on the day in question, Williams was deployed to assist in the retrieval of a sack thrown overboard by a drug suspect vessel.

The depth of water was about 130 feet.

“Due to his experience and training, [Williams] calculated all the numbers and all the decompression stops required to complete a third dive which was a risk, but he was confident. On that third dive, he found the sack at the bottom of the sea, attached to a heavy engine flywheel,” the citation said.

“In total, he completed four dives during that operation.”

Williams is the only diver in the SVG Coast Guard capable of doing decompression dives.

“This is very dangerous and a decompression chamber is required to be on site when this is done,” the citation said.

“Williams has been diving in the Coast Guard for the past 20 years and is the only diver who has been giving evidence in the Magistrate and Supreme Courts in retrieving murder weapons, (guns, ammunition, and knives) and narcotics,” the citation said.

One parcel of the cocaine that Williams risked his life to retrieve later went missing from the Narcotics Base in Arnos Vale, triggering an investigation that involves a “foreign agency”.

Station Sergeant of Police Catherine Robinson, at that time, second in command of the Narcotics Unit and a narcotics officer with 25 years’ experience, who was later transferred immediately after her testimony whilst on vacation, had revealed in response to questioning during trial that she and other officers were in the evidence room on the date when the parcel of drugs was discovered missing because they had found out that exhibits were being tampered with.

The senior officer had given the information after being ordered by the judge to answer a question about the particular reason she and other officers were in the evidence room on the date when the parcel of drugs was discovered missing.