Community-policing and youth work, a winning combo for Policeman of the Year 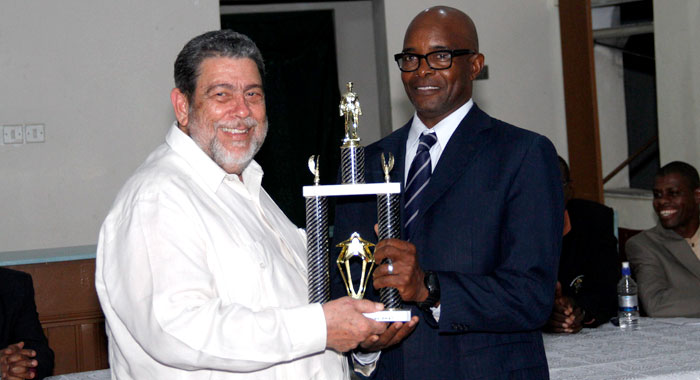 Community-policing and youth work was a winning combination for Policeman of the Year 2017 in St. Vincent and the Grenadines, Sergeant 315 Meldon James.

James has been a police officer for 27 years, during which time he has worked at Traffic Branch, Criminal Investigations Department, Police Training School, Bequia, Colonaire, Georgetown, Layou, and at Central Police Station Office in the prosecution area.

He spent the most time — 12 consecutive years — at the Traffic Department and is currently assigned to the Questelles Police Station, where he is in charge of one of the units.

The citation said that during 2017, James, while stationed at Georgetown and, later, at the Questelles Police Station, exemplified the qualities and leadership that a model officer should.

He has “perfected the community-policing model, having been consumed in youth development work at all levels both in the organisation and the country as a whole.”

James is a former national footballer and track and field athlete and is a sports enthusiast, coach, trainer and mentor.

“Having attained those accomplishments, Sergeant James’ appetite for success as a coach and trainer was not quenched. He went on to coach the Police Football Team to win the knock-out round and placed 2nd in the Firms’ Football Competition. He then coached the Police Masters Team to 2nd Place in the local Masters Cricket Tournament and was also the coach of the Police Cricket Team that won the North Leeward 20/20 Cricket Competition.

“Sergeant James is not only endowed with policing and leadership qualities. He is an accomplished playwright and Director. He is currently the main writer and director of the Police Drama Club and spearheaded the club’s participation in this year’s Drama Festival by writing and directing the play ‘How yo mek yo bed’,” the citation further said.

James told iWitness News that he feels “really great” about receiving the award “because I never stop working. I am a very, very hard worker and I feel honoured to receive that award.”

He told iWitness News that he does a lot of youth work.

“Being a former national soccer player and a former national sprinter, I use that to do a lot of community policing. I get involved in coaching. I actually do a youth programme right in Rillan, where I’m living, so I think that distinguished me from other police officers,” said James who is originally from Barrouallie and is the father of three children.

His advice to other police officers is “to be humble and trust God in running your division because when I go to work, I actually ask God to do this with me, because I can’t do this alone. So I think that is really the key factor.”

Regarding Questelles Police Station’s award for best in customer service, he said:

“That is one of the things I enforce because I travel because of sports and I meet a lot of different people, different culture and I try to instil that. I even try to instil dieting and exercise.”

He said the efforts of other officers such as Corporal Philbert Chambers, who is also involved in a lot of youth work, also help.

“We also do a lot of youth work. We give a lot of food baskets and we do a lot of home visits and get in touch with people. We distribute schoolbooks and also distribute used clothing, or new, once we get them.”

James told iWitness News that working at no particular station is especially hard.

“It’s basically how you interact with the community because no police [officer] can do the job alone. It’s just how you work along with the community. So, in order for you to have the community with you, you have to do community policing. For example, you might meet an old lady walking with a bag. You give her ride around the road and something like that,” he said.