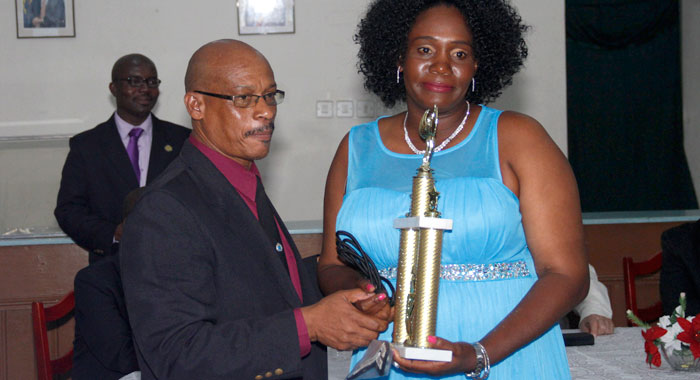 A woman police officer is ringing in the New Year in a new rank after receiving a surprise promotion at a ceremony last Thursday, Dec. 28, 2017, where, for the second time since 2015, she was adjudged Police Woman of the Year.

Edna Haywood was not promoted during the regular course of things although she was instrumental in the arrest of Ricardo “Shrek” Mc Fee, who was the target of the Oct. 14, 2017 mass shooting in Diamonds that left one dead and nine nursing bullet wounds.

At the time of his arrest, Mc Fee was a person of interest in the daring daylight attempted murder of Paul’s Avenue resident, Jawansa “Sanga” Fraser, one day after the mass shooting.

He has since been charged along with three others in the attempted murder of Fraser, and has been indicted, along with one other man, in the October 2016 murder of a 10-month-old baby. He had been discharged earlier in 2017 on that same charge during a preliminary inquiry.

Haywood cried in the embrace of Superintendent of Police Ruth Jacobs – the nation’s first female chief detective — shortly after receiving from acting Commissioner of Police Renold Hadaway her insignia for the rank of corporal of police, a rank in which she will act.

In presenting the award, the police chief said Prime Minister and Minister of National Security Ralph Gonsalves had noted to the ceremony that fact that Haywood had not been promoted although she was Police Woman of the Year.

“We held discussions and we decided that we will correct the wrong. How can someone be voted Police Man or Woman of the year, and he is left in the doldrums, so to speak. Tonight, I have the privilege of promoting you to acting corporal,” the police chief said.

His announcement triggered applause from most of the members of the audience,  a nod from Jacobs — who, like the commissioner, will this week proceed on pre-retirement leave — who shouted “No!” meaning that Haywood should have been promoted to a full corporal.

“Congratulations, my darling! Come,” Jacobs told Haywood after she had collected her trophy and corporal insignia from the police chief.

The awardee then became emotional and spent some time in the embrace of the superintendent, who consoled her.

“Let us realise that her efforts over the years have been recognised and appreciated and it is for other persons, as the years go by, to make it their utmost best to compete and awarded as she is tonight. Let us raise the bar, so to speak,” the commissioner said to more applause.

The citation read at the ceremony said that Haywood continues to show her competence, professionalism and discipline while performing her daily duties as a port police officer.

“She maintains respect for authority with excellent conduct on and off the job. With her keen knowledge of the job, good oral and written communication skills, she is highly commended with regards to how she presents evidence in court. She has superb coordination.”

Haywood was also adjudged the most outstanding Port Police Officer.

In 2017, she made 10 arrests and has been involved in a large number of cases involving controlled drugs at the Port.

She also assists in the deployment of officers (stationed at the Port facilities) on a daily basis, and performs all her duties efficiently in the absence or presence of a non-commissioned officer, the citation said.

In 2015, Haywood won an award for being the hardest worker at the Port, in addition to being Police Woman of the Year.

Speaking to iWitness News after the ceremony, Haywood, who has also worked at the Traffic Branch and two other units of the police force, said that at the Port, officers provide security, preventing drugs, ammunition and other illegal items from moving between Kingstown and the Grenadines.

They also provide security for workers and ships at the Port, because of the international Ship and Port Facility Security (ISPS) Code

She said while she is not in charge of the officers there, most of the time she works as an NCO.

“Most times when there are no NCOs, I will be like the senior person there,” said Haywood, who is a younger sister of Superintendent of Police Timothy Hazelwood.

She said she felt good about her promotion, adding that while she was expecting it for some time “I didn’t know I was going to get it tonight, so I am very overwhelmed.”

3 replies on “Model cop gets surprise promotion at police awards  ”