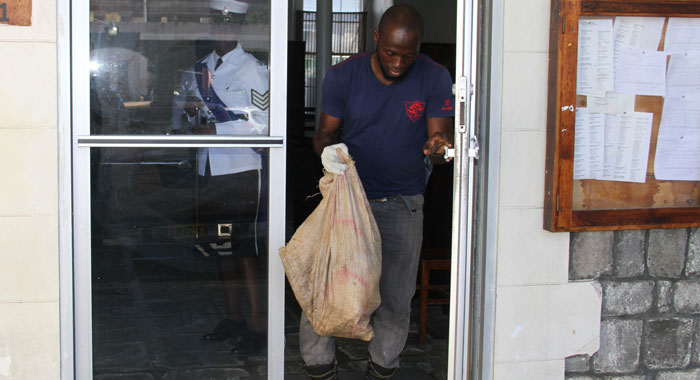 A police officer removes from the High Court on Dec. 12, 2017 the bag from which a package of cocaine is missing. (iWN photo)

All officers assigned to the Narcotic Units were made to take lie detector tests last year after police discovered that at least one parcel of cocaine had gone missing from the evidence room.

Prime Minister and Minister of National Security, Ralph Gonsalves made the disclosure at a press conference on Tuesday, when he was asked to comment on the development, which became public during a court hearing last month, December 2017.

The information relayed to the court was that in May 2017, officers at the Narcotics Unit, based in Arnos Vale, discovered that a portion of the exhibit was missing.

The missing parcel of cocaine was part of a quantity of 9,159 grammes (20.2lbs) of the drug that Petty Officer Lennox Williams of the SVG Coast Guard had risked his life to retrieve by making four dives in 130-feet of water during a police and Coast Guard operation off West Key, Bequia on July 3, 2014.

Williams received the 2017 police award for bravery last month, days after a jury convicted Union Island residents Harvey Benjamin and Vincent Denbar of drug possession and trafficking in connection with the find.

Gonsalves told Tuesday’s press conference that he had learnt of the incident before it was revealed in court, adding, “As Minister of National Security, you can’t have a portion of an exhibit being missing without the minister being advised.

“And immediately, the authorities embarked on an investigation which is not yet completed,” Gonsalves said, adding that he was hoping that it would have been completed under the watch of acting Commissioner of Police Renold Hadaway, who proceeded on pre-retirement leave on Tuesday.

“And as part of that investigation, I can report to you, though not the results, that we had brought in the technical expertise necessary to carry out polygraph tests, what you may call lie detector tests on all those who were at the Drug Squad.”

Gonsalves said this should give an indication of the seriousness with which his government is treating the matter.

“I don’t want to say anything more about it, ladies and gentlemen of the press, except to say that I am awaiting the conclusion of the investigation.”

He said some persons have sought to contact him speculating about who might be responsible for the disappearance of the cocaine.

“Anybody who contacts me about these things, I’m not interested in talking to anybody about it,” the prime minister said.

Gonsalves, noting his experience and training as a lawyer, said that one may believe that “John Browne” is guilty of something but might not have “a sufficiency of admissible evidence in relation to John Browne.

“But there may be other things which can be done in relation to John Browne, without a criminal matter. I don’t know what the investigation is going to deliver in terms of the credible admissible evidence. So I will have to wait on that,” Gonsalves said.