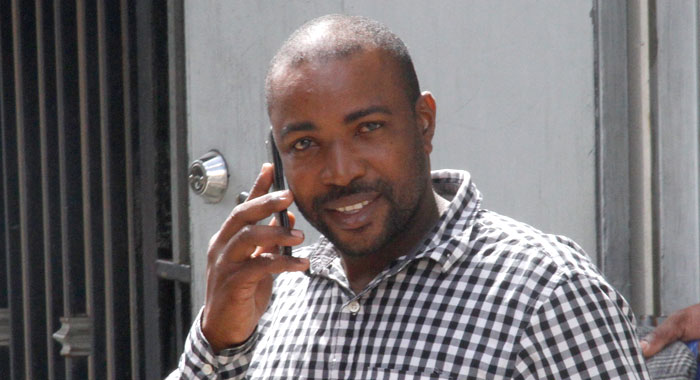 The defendant, Allan Gibson, speaks on his mobile phone after his trial on Wednesday. (iWN photo)

The allegedly unconstitutional practice of dismissing from employment and before a court trial, Vincentians accused of crimes in Mustique was highlighted during the trial of a man charged with possession of cocaine and marijuana in that Grenadine island.

“Once you work in Mustique and there is an allegation made against you as a Vincentian, our courts don’t have to judge your fate. It’s kind of like the French law. You are guilty until you are proven innocent. But it is what it is. Until such time as it is changed, we have to live with it,” counsel Grant Connell said at the Kingstown Magistrate Court on Wednesday, Jan. 3, 2018.

The counsel was speaking during mitigation in a case in which Redemption Sharpes resident Allan Gibson had pleaded guilty to a charge that on Jan. 1, 2018 in Mustique, he had in his possession six grammes of cannabis and three grammes of cocaine, with intent to supply it to another.

The Crown’s case was that on New Year’s Day, the Mustique Co. had a function at Basil’s Bar when the security officer, Martin Findlay, received information and, as a result, asked the defendant if he was selling drugs during the party.

Gibson told the security guard that he was not selling drugs but if anyone requested it he would supply it.

The security asked him if he had any more drugs on him and Gibson pulled out a package containing seven white packages containing plant-like material resembling cannabis and three transparent resealable envelopes containing whitish substance resembling cocaine.

As a result, Findlay contacted the police and Station Sergeant Cuffy went to Basil’s Bar where Findlay handed over Gibson and the drugs to the police.

Gibson was arrested and taken to the Mustique Police Station, where he told police that the money was from selling drugs.

In mitigation, counsel Grant Connell told the court that his client is a 40-year-old Vincentian, originally from Redemption Sharpes, who has been working in Mustique for the last 22 years in construction and gardening, his last job being at Great House.

He said the defendant, a father of two, has no previous convictions and is a hard working Vincentian.

“He is not the average Vincentian because he has worked in Mustique for 22 years. To live, work and survive in Mustique as a black man is very difficult,” Connell told the court.

He said Gibson knew what he was holding, hence his guilty plea.

“He has worked in Mustique for 22 years. He is friends with many, tourists and local alike, on a land of the rich and famous who appreciate the services of locals and whose tips are a reflection of their appreciation, hence the varying amounts of currency he had on him: euros, pounds, US dollars.”

Connell asked the court to look at the man’s character and the path he has walked for 22 years.

“Given the modus operandi of the island, and when there is any allegation of criminal offence on that island, unlike the mainland, where the Constitution clearly states a man is entitled to a fair trial, a man is innocent until proven guilty, (‘Or pleads guilty,’ interjected the magistrate, Bertie Pompey,), he would not have a job in Mustique. They are usually relieved of that before they come to you (the court). So, the security, led by Findlay et al, usurps the power of the court, I would say and make a decision.”

Connell said that his client has already suffered that fate and, therefore, asked the court not to impose a custodial sentence

He said the quantity of the drugs was relatively small and was more in keeping with the instructions given to him by Gibson.

Connell said the six packages of marijuana have a total value of EC$18 dollars but said he does not know the value of the cocaine since it is not grown or produced locally.

“This counsel has no idea of the value of that, so I cannot guide the court,” he said.

He said his client was remorseful and denied telling Findlay that he is supplying.

“’I am not selling but I am supplying?” He was given it to hold by someone. If Mr. Findlay doesn’t want to say that because of the ramifications which might exist, that’s him.

He said his client was throwing himself at the mercy of the court.

“Six spliffs (marijuana packages) and three grammes. That’s quite a supplier. Or just a good night for one individual in Mustique,” Connell said and reiterated that his client was given the drugs to hold.

In sentencing Gibson, the magistrate said he had taken into account the man’s early guilty plea, that he has no previous conviction and the fact that he has lost his job.

“But that is as far as the mitigating factors go,” Pompey said.

He said that from the way the drugs were packaged, the court found it reasonable to assume that they were packaged for distribution — “for peddling”.

He said that had it not been for that fact, he would have been more lenient with the defendant, especially on the cannabis charge, adding that he found the amount — six grammes — “trivial”.

He, therefore, fined the man EC$200 for the cannabis, adding that he would have reprimanded and discharged him had it not been for the way the drug was packaged.

The man was given one month to pay or serve three months in prison.

For possession of cocaine, which the magistrate said was a more serious charge, Gibson was fined EC$500 to be paid within a month or four months imprisonment.

The Financial Intelligence Unit has confiscated the monies that Gibson had when he was arrested.