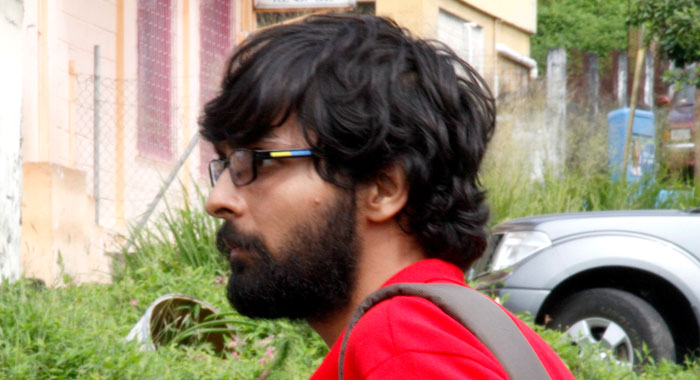 An Indian software engineer who stole 11 chocolate bars and a wig valued at EC$550 wig from two Kingstown stores was reprimanded and discharged while two Vincentians on separate and unrelated theft charges of items of lesser value were fined or jailed at the Serious Offences Court in Kingstown on Friday, Dec. 29, 2017.

The Indian man, Ritwik Saxena, pleaded guilty to a charge that on Dec. 23, 2017 in Kingstown, he stole 11 bars of Vincy Dark Chocolate valued EC$129, the property of Massy Stores.

He further pleaded guilty to a charge that on Dec. 28, 2017, he stole one 100 per cent human hair wig from Diamond Girl.

Saxena was jointly charged along with his sister, Annya Saxena, also of India, who pleaded not guilty to both charges, which the prosecution later withdrew.

The court heard that the defendants have been living at Fountain for a few months.

Last Thursday, they were brought to the Criminal Investigations Department in respect of a report of theft.

A search of Mr. Saxena’s bag revealed the chocolate bars, and when asked about them, he said that he did not know about their origins.

A police investigation led to a review of surveillance footage at the Massy Store in Kingstown, in which Mr. Saxena was seen placing the chocolate bars in his backpack and leaving the store without paying.

Regarding the theft of the wig, the court heard that both defendants were in Kingstown last Thursday and were in Diamond Girl, a cosmetics store, where Mr. Saxena was seen on the surveillance cameras removing a wig from the head of a mannequin and putting it in his bag and leaving the store without paying.

The police were called in.

Detective PC Kemelia Boyd saw the defendants in Kingstown and informed them of the report and took them into custody and they were later charged.

In mitigation, counsel Ronald “Ronny” Marks told the court that Mr. Saxena is a 25-year-old software engineer who was living in India with his mother, a medical doctor who was practicing in Dominica.

His sister was also a medical student in that Windward Island.

After the passage of Hurricane Maria last September, the defendant’s mother and sister relocated to St. Vincent and Mr. Saxena travelled from India to St. Vincent to assist them.

Marks said that having interacted with the defendant, he seems to be extremely intelligent, which intelligence, he said, manifests itself in other ways.

However, the defendant’s grandmother is sick with cancer and his mother has returned to India to assist, Marks told the court.

The lawyer told the court that the crime is one of petty theft that is very embarrassing for the family, adding that the defendant seems to be in need of some professional assistance.

The lawyer told the court that Mr. Saxena is scheduled to travel back to India in January and noted that the stolen items have been recovered and restitution is possible.

He said there were no aggravating factors in the case that would cause the court to consider anything but a financial penalty.

“Keep your hands in your pockets,” she said and told the man not to pick up, in stores, items that he is not paying for.

“You are too smart for that,” she said and told the defendants that she is sure that he, as a software engineer, is aware of CCTV that can record his images.

“So, please engage yourself in more productive activity. Go run around a playing field and play, and play some football or something, if you are otherwise bored and do something on a keyboard, computer, create some new app,” she said.

Browne-Matthias told the man to engage his hands and his mind in some other way than theft because it doesn’t look good and is an embarrassment to his family.

“Sorry, your Honour,” the man said.

The chief magistrate ordered restitution of the items, saying they are in pristine condition and reprimanded and discharged the man.

“Do not try that again. You may not be so lucky,” she said.

And two Vincentian men who appeared before the chief magistrate after the Indian accused were, indeed, not so lucky.

The chief magistrate jailed Nekeno Homer, 22, of Redemption Sharpes for four months and ordered restitution of a cell phone that he stole on June 2, 2017.

The black and silver Blu cellular phone, value, US$198, was stolen at Arnos Vale from Nigel Walters of Upper Cane Hall.

The court heard that Walters is a student who works part-time at Sunrise Supermarket at Arnos Vale.

Also on that same day, a 20-year-old youth surnamed Glasgow, of Arnos Vale, was ordered to compensate Dino Jackson of Largo Height in the sum of EC$200 or spend one month in jail. He was further ordered to pay a fine of EC$500 forthwith or spend three months in jail.

Glasgow had pleaded guilty to a charge that on Dec, 21, 2017 at Kingstown, he stole $200 from Walter Jackson, his supervisor at Massy Store, Kingstown.

The defendant had told the court that he had nothing to say about his action.

Glasgow stole the money when he and Jackson were searching for some documents on Jackson’s desk.

The men were unable to find the documents, and Jackson went to the restroom.  When he returned, he found his wallet on the floor with the $200 missing and Glasgow still searching for the documents.

The matter was reported to the police and a charge was brought against Glasgow, who pleaded guilty when he appeared in court.