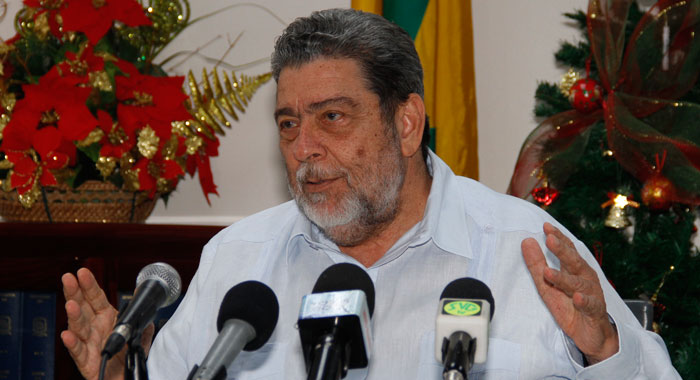 The government will “tackle vigorously” the various businesses and entities that are not current with their taxes.

Prime Minister Ralph Gonsalves told a press conference on Tuesday, Jan. 2, 2018, that his government has to address very seriously outstanding arrears on taxes and penalties.

He said there is a lot of talk about how much the government owes the private sector.

“And that number is not a significant number relative to the business the government does,” he said, but acknowledged that a delayed payment by the government could put pressure on an individual business.

“We all must all ensure that we pay what we owe on a timely basis,” Gonsalves said.

Of that amount, EC$177.4 million is the base tax owed across all categories of taxes and the remainder is made up of penalties — EC$26.88 million and interest — EC$97.5 million.

Gonsalves noted that interest on taxes owed is 1.5 per cent a month or 18 per cent per year.

He said it is in the interest of entities that owe taxes to take a loan to settle it, because of the interest rate.

There are also some arrears on property tax, but the number had not been supplied to him, the prime minster said.

He said ordinary people would be concerned about the taxes owed but the two that would really “revolt” them are monies owed on value added tax.

The base VAT owed to government is EC$34.3 million, on which there are penalties of EC$22.8 million and interest of EC$11.5 million, bringing the total to EC$68.7 million.

He said the penalties and interests “can squeeze you extraordinarily”, adding that persons who owed VAT have to do something urgently.

“That’s trust money. That is money which the consumer pays and you collect it to pass on to the government. In other words, you are keeping money which people have already paid for the government,” Gonsalves said.

The Gonsalves government is well positioned to understand the implication of such a situation, choosing to borrow from the National Insurance Services (NIS) to pay the NIS millions of dollars in deductions that the government had withdrawn from workers salaries and not paid into the state-owned pension fund.

The prime minister noted that it is a criminal offence to not pay over VAT to the government.

He further pointed out that some persons deduct workers PAYE and do not pay it over to the government.

“And when you have several people doing so, it adds up.”

He said this is also a bad thing for employees because at the end of the year when reconciliations are done, persons might not receive any refund from the Inland Revenue Department.

“So it’s a matter which I want to assure everybody, which the government is going to tackle vigorously,” he said.

Gonsalves said he knows that people will say that the government has run out of money and want to squeeze people.

He further said that the International Monetary Fund made the point about collecting taxes.

Gonsalves, however, said, that the IMF’s was not an original point, they having repeated it from him.

One reply on “Tax defaulters to be tackled ‘vigorously’ — PM”