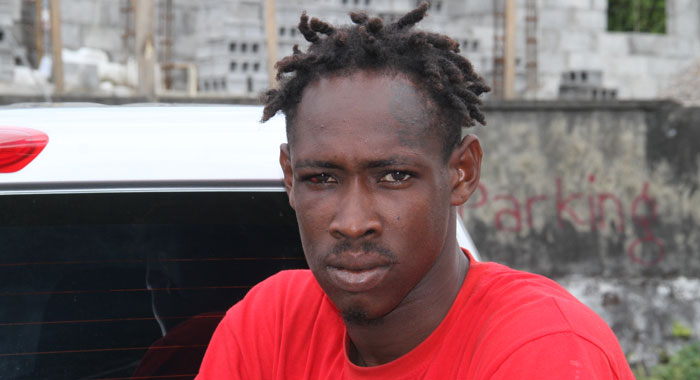 The charges relate to Sydney Fortune of Grenada. (iWN photo)

A magistrate has given the prosecution and police a lesson on how to properly word charges against someone accused of entering St. Vincent and the Grenadines illegally.

Bertie Pompey delivered the lesson at the Kingstown Magistrate’s Court on Friday, Jan. 5, 2018 at the arraignment of a Grenadian brought up on three immigration charges.

The magistrate told the prosecution that no charge was made out and gave them time to amend or withdraw what was proffered to the court.

He was further charged that at the same date and place, he “entered the state by boat and disembarked without the consent of an immigration officer”

A third charge was that Fortune “entered the state without a passport” on Jan. 3, 2018 at Rose Bank.

“I have stated it before already. The person must either be a national of X,Y,X country or a non-national of St. Vincent and the Grenadines who entered the state by boat. And that will distinguish him from the other Vincentians.”

The magistrate said that defence counsel, Grant Connell, who was sitting at the bar table at the time, but was not representing Fortune, had appeared in several similar matters and had missed the discrepancy.

Connell, however, said, “Missed?” and mumbled something about having no faith.

Prosecutor Corlene Samuel had begun to present the facts when Connell rose and said, “But, your honour, if he pleads guilty to something that you know is not right, he has to change his plea.”

The magistrate said he has entered a guilty plea and Connell suggested that the prosecution withdraw the charges.

The magistrate said he would enter not guilty pleas for the man.

He then asked the prosecution if the matter was being withdrawn of it they were asking for an adjournment.

The matter was then adjourned to today, Monday.

Connell, however, argued that there is no charge before the court and it is either that the prosecution ask for an amendment or withdraw the charge.

The magistrate, however, said he can adjourn it and the prosecution can inquire about the merits of the charges.

Fortune is among three men — the others Alwaky Stapleton, 37, a technician and Caldrick Chambers, 26, self employed, both of Rose Hall — who were charged that on Jan. 3 at Rose Hall they had in their possession one .38 revolver, serial number unknown and one round of .380 ammunition without a license issued under the Firearms Act.

The men were also found in possession of 16,344 grammes of cannabis with intent to supply.