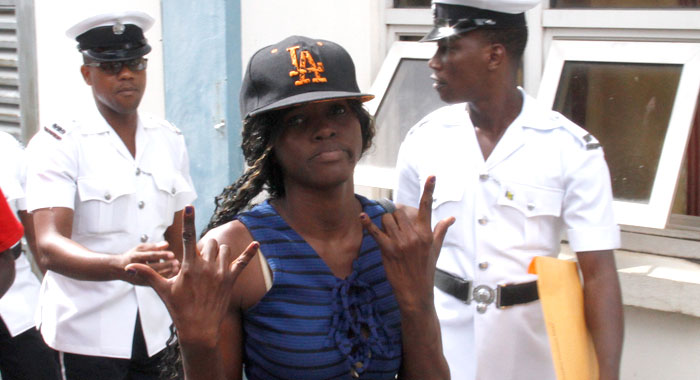 The St. Vincent and the Grenadines Human Rights Association (SVGHRA) said Wednesday that the court has the power to make orders such as the one that saw former model Yugge Farrell being sent to the psychiatric hospital for two weeks’ observation.

The SVGHRA said that no report had been made to it on the matter, but said that it believes that it is “prudent to make a statement at this point in time”, saying that the matter “appears to have consumed sections of the Vincentian Society both here and in the Diaspora”.

The rights group noted that last Friday, Jan. 5, a defendant before a Magistrates’ Court was ordered to be sent to the Mental Health Centre for a period of two weeks for the purpose of an evaluation.

“Under the Laws of Saint Vincent and the Grenadines Revised Edition 2009, a court has the power to make orders of that nature, in particular circumstances as indicated in”

“Section 115(1) of the Criminal Procedure Code Cap. 172 which provides as follows:

“Where in the course of a trial or preliminary inquiry, the court has reason to believe that the accused may be of unsound mind and consequently incapable of making his defence, it shall inquire into the fact of such unsoundness and may, for that purpose, order him to be detained in such place as the court may direct or in such other place as may be provided by any law, for medical observation and report for any period not exceeding one month.”

“Where a court has ordered that a person charged before it who appears to be incapable of making his/her defence to be detained for report, that person shall be admitted to a psychiatric hospital and detained therein.”

“It MUST be noted however, that any order made by a court for the detention and evaluation of any person can be challenged by way of an appeal, in accordance with the relevant provisions.

“The SVGHRA takes this opportunity to request that the general public refrain from the publication and re-publication of material which is likely to attract liability either criminally, under the Cybercrime Act or civilly, subject to the laws of defamation,” the group said.

Farrell was sent to the psychiatric hospital for evaluation after pleading not guilty at the Kingstown Magistrate’s court that on Jan. 4, she used abusive language to Karen Duncan-Gonsalves, to wit, “you dirty b***h”.

After Farrell pleaded, the prosecution asked that she be sent to the Mental Health Centre for two weeks’ rehabilitation.

The prosecution offered no evidence in support of their application.

The matter has led to widespread outcry in light of the fact that the prosecution offered no evidence to support its application and only made the application after Farrell had pleaded guilty.

Farrell has used her social media account to post videos in which she claimed to have had an intimate relationship with Minister of Finance, Camillo Gonsalves.

The minister has not commented on the development, but his younger brother, Storm Gonsalves, says that Camillo knows of, but does not know Farrell.

Storm, who has deemed Farrell “crazy”, although he has no known training in psychiatry, said on Monday that Farrell had repeatedly threatened his brother and his family.

7 replies on “Court acted within its power — rights group”