Man’s attitude lands him in jail 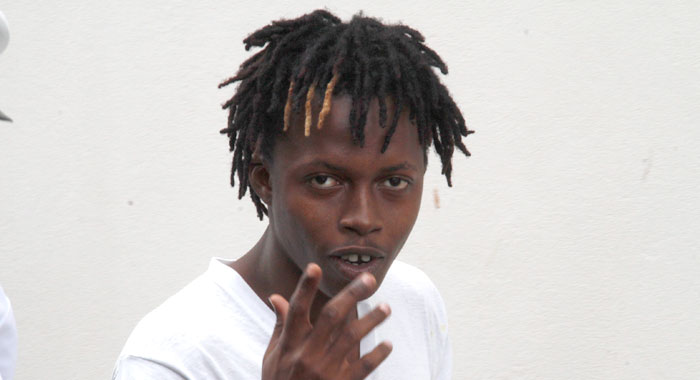 Calvin Miller , 20, gestures as he leaves the Serious OFfences Court for prison on Thursday. (iWN photo)

A 20-year-old Bequia man who drove a vehicle while holding a suspended driver’s licence will spend the next four months in jail after the court determined that he was not remorseful for his action.

The term of imprisonment, as well as fines of EC$3,750 were imposed on Calvin Miller at the Serious Offences Court on Wednesday.

The man had pleaded guilty to a charge that, on the same day, Jan. 10, at the Port Elizabeth Public Road, he drove motor vehicle PM587 while being disqualified from holding or obtaining a driver’s licence.

He further pleaded guilty to a charge that on the same day, he used the said vehicle without a policy of insurance being in place.

The court heard that about 7:50 a.m., PC Bobb was on Traffic duty at the Bequia Wharf when he saw Miller park the vehicle outside the Bequia Tourism Office.

Miller exited the vehicle, went to the back and opened the trunk.

Bobb, knowing that Miller had been disqualified from holding a driver’s licence, went to the vehicle and asked him why he was driving while being disqualified.

He was taken to the Port Elizabeth Police Station where he was charged.

In mitigation, defence counsel Ashelle Morgan told the court that Miller had dropped out of school when he was 15 to help his mother, a vegetable vendor.

She said that it is partly because of this trade that he had found himself in that predicament.

Morgan said that given Miller’s youth and lack of any other serious convictions, he has good prospects for rehabilitation.

She said her client was clearly remorseful and had not wasted the court’s time.

She implored the court to impose a fine, adding that precedent had been set in that another man on the same charge who appeared in court that day had had a fine imposed on him.

However, Senior Prosecutor Adolphus Delplesche observed that each case must also be determined on its own merit.

He said that the accused man had displayed contempt in his response to the arresting officer, adding that he had not shown any remorse in court.

However, Chief Magistrate Rechanne Browne-Matthias, while commending the counsel on her “sterling” mitigation, said there was nothing in the defendant’s demeanour that suggested remorse.

She further said that when the police, in regard to his suspended licence, questioned Miller, he just said, “Yes. I know.”

The magistrate was critical of the man’s decision to drop out of school and said parents have to do better, in that even if their children are not academically-inclined, they should be made to learn a skill.

She stood the matter down for a while to consider sentencing.

When Miller was called back to the dock over an hour later, the chief magistrate said she wanted to highlight the gravity of the matter by reading from the relevant law under which the man was charged.

She noted that he could be fined up to EC$5,000 and sentenced to six months imprisonment.

Browne-Matthias further reiterated that while Morgan’s mitigation was Sterling, her client had shown no remorse.

She said that in that vein, he was in contempt of court and further noted that Miller had driven the vehicle at the instruction of his mother.

For driving while being disqualified from holding a licence, Miller was jailed for four months and fined EC$3,000 to be paid forthwith or face four months’ imprisonment.

He was further ordered to pay EC$750 by Jan. 31, 2018 for driving the vehicle without a policy of insurance.

The magistrate said that had it not been for the “sterling” mitigation of his lawyer, his penalties would have been worse.

8 replies on “Man’s attitude lands him in jail”