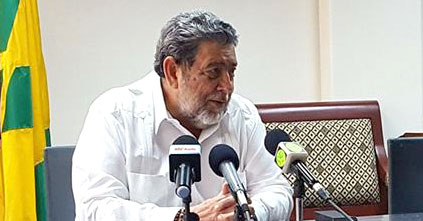 The ongoing currency issue in which Vincentian traders in agricultural produce are unable to convert their earnings to Eastern Caribbean dollars after plying their trade in Trinidad and Tobago could end up before the Caribbean Court of Justice (CCJ).

The Prime Minister of St. Vincent and the Grenadines (SVG) told a press conference on Monday that while his government has implemented short-term measures of “a sensible, practical nature” to deal with the matter in Kingstown, a long-term solution is needed.

As a result of the ongoing situation, some traders have large stockpiles of Trinidad and Tobago currency in Port of Spain and farmers in SVG are becoming reluctant to sell to these traders because of the delay in getting paid.

As result, Kingstown has set up a facility at the Bank of St. Vincent and the Grenadines that allows traders to convert Trinidad and Tobago dollars to their Eastern Caribbean dollars equivalent.

Port of Spain has said that it is constrained by a shortage of foreign exchange in its financial sector.

On Monday, for the second time this month, the media asked Gonsalves about the situation, which earlier this month he said he would raise at the meeting of Caribbean Community (CARICOM) leaders in Haiti next month.

The prime minister said his recently appointed Minister of Finance, Camillo Gonsalves, has asked the older Gonsalves to assist him and speak on the matter at the meeting of the Eastern Caribbean Currency Council, also taking place next month.

“And I will raise it and I will make certain suggestions about certain things which we may have to do beyond what we have been trying,” the prime minister said, adding that he knows that the governor of the Eastern Caribbean Central Bank, Timothy Antoine, has been trying with the Central Bank of Trinidad and Tobago to resolve the situation.

“And we’re not making the progress which we should be making,” he said, adding that the issue is of great importance and that is why he has accorded it that level of importance “and to see if we can have a long-term solution, which is fair”.

Regarding the stockpiles of Trinidad and Tobago dollars that Gonsalves said Vincentian traders have in Port or Spain, he said:

“What you want them to do? To buy Trinidadian goods to bring them here to sell? This is what I say to [Prime Minister of Trinidad and Tobago Keith] Rowley. It’s wrong. It’s unfair. And I haven’t checked the lawyers on it, but I suspect that it is a matter which the CCJ may well have to pronounce on.

Gonsalves, who is also a lawyer, said Port of Spain cannot simply say that things are difficult and it doesn’t have the foreign exchange.

Speaking about the deficits that the United States has with Japan or with China, Gonsalves said the debate is not about currency in the sense of unavailability of foreign exchange to pay.

“That’s not the debate. The debate [is], ‘Look man, organise your internal arrangements in such a way that you could consume more American goods nuh, let we see how we could deal with addressing this imbalance of trade.

“But in our case, I’m acknowledging that given the extent of the fuel that we buy from Trinidad and the small size of our manufacturing sector compared to Trinidad, and our agricultural sector, that we are not going to, in the foreseeable future, have a balance of trade in our own favour, or coming close.

“… And where the matter is compounded with its unfairness, Trinidad manufacturers get their energy far cheaper than we get it. So energy being an important component in the manufacturing process, they have a competitive advantage over us.”

Gonsalves used the example of Blue Waters, bottled in Trinidad and Tobago saying that it is purified water rather than spring water, as bottled by Mountain Top Springs in SVG.

He said Mountain Top Water in SVG is a different product, because it is spring water, rather than bottled water, adding that the ordinary man does not pay attention to the source of the water, but the price.

“Blue Waters is cheaper, given the nature of the product itself, but they also have a competitive advantage because of the cheaper energy… Objectively, in relation to the energy, puts Trinidad and Tobago in an advantageous position. And then you’re coming to tell me, the little stuff we selling you, you ain’t giving me my foreign exchange. How could that be fair? Absolutely wrong,” Gonsalves said.

2 replies on “SVG might sue Trinidad over currency issue ”