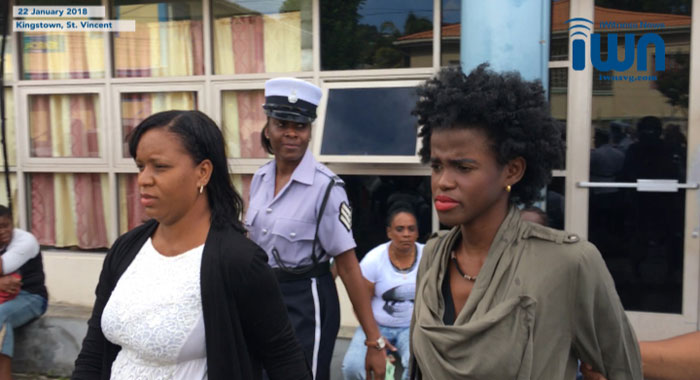 Yugge Farrell, right, is escorted from the Kingstown Magistrate’s Court by plainclothes and uniformed police officers in February. (iWN image)

Former model Yugge Farrell, 22, was given antipsychotic drugs against the advice of her lawyer, defence counsel Grant Connell told the Kingstown Magistrate’s Court on Monday.

“…  from my visits to the institution, contrary to my advice, Yugge Farrell was given medication,” he told Senior Magistrate Rickie Burnett.

Connell said that his client was given Risperidone and Lithium during her court-ordered two weeks of evaluation at the Mental Health Centre.

Risperidone is an antipsychotic medicine that works by changing the effects of chemicals in the brain.

Risperidone is also used to treat symptoms of irritability in autistic children who are 5 to 16 years old.

The website says side effects of the medication include uncontrolled muscle movements in the face (chewing, lip smacking, frowning, tongue movement, blinking or eye movement).

The same website says that lithium affects the flow of sodium through nerve and muscle cells in the body. Sodium affects excitation or mania.

Farrell has been the subject of national debate since she was arrested on Jan. 4. 2018 in Kingstown and charged that on that day, she used abusive language, to wit “you dirty b***h” to Karen Duncan Gonsalves, wife of Minister of Finance Minister Camillo Gonsalves, and the daughter-in-law of Prime Minister Ralph Gonsalves.

She pleaded not guilty to the charge at her arraignment on Jan. 5 before Bertie Pompey, the then Kingstown Magistrate, who upheld an application by prosecutor Police Constable Corlene Samuel that Farrell be sent for psychiatric application.

Connell had protested in vain again the application, noting that it was presented without supporting evidence.

Since her hospitalisation, Farrell has appeared in videos published on the internet in which she has made a number of allegations, including that she was in a sexual relationship with Camillo, 44, which ended in 2016.

During Monday’s court hearing, Connell said that his client has a history of having been given olanzapine, another antipsychotic drug.

“Up until I saw Yugge Farrell on Thursday, she was not behaving [as she did today],” Connell said in an apparent reference to the howl-like sounds that the woman had made in court.

Farrell’s demeanour in court was in stark contrast to her quiet and composed disposition at her arraignment two weeks earlier, when she sat quietly while awaiting her arraignment and spoke only when requested to while in the dock.

“Risperidone and Lithium have certain effects, which, from what I saw transpired before Magistrate Pompey, this appears to be the second link to appear as that which she is not,” the lawyer said.

Some persons have interpreted his comments as an orchestrated effort to have Farrell legally certified as insane.

He further said that the report presented to the court was not signed by psychiatrist, an argument that Director of Public Prosecution Colin Williams countered by saying that the law does not say that the patient has to be examined by “a psychiatrist quote-unquote”.

“I am asking the court not to accept this report and to request a report from a psychiatrist, which the defence can provide,” Connell told the court.

He said Farrell was hospitalised at the Milton Cato Memorial Hospital on Feb. 8, 2017 and was given intravenous fluids for dehydration.

“… and within 48 hours, treated with Olanzapine, an antipsychotic medication that affects the chemicals in the brain, and released as an outpatient on that strength of drug.”

He said that now, the DPP was asking for an order of the court “to support the further detention of this young lady in an institution that is not equipped to deal with anyone with the allegation of some mental instability”.

The psychiatric report was not read in court, but iWitness News understands that it says Farrell is unfit for trial.

One of Farrell’s older sisters, who did not give her name, told the media outiside the court on Monday that Farrell was given antipsychotic medication at the Mental Health Centre on the weekend.

“Yesterday (Sunday) when I went out there, she was good, so they had to give she something last night,” she said.