Yugge ‘not crazy’ but has ‘a mental issue’ — sister (+Video) 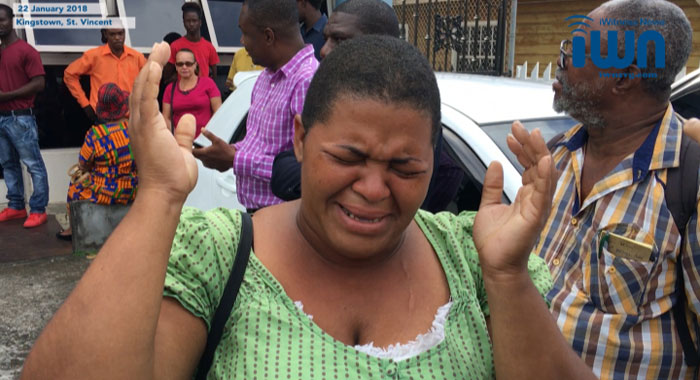 Yugge Farrell’s older sister, who did not give her name, cries outside the Kingstown Magistrate’s Court on Monday after the former model was taken back to the Mental Health Centre. She told the media her sister was give(iWN image)

An older sister of the model Yugge Farrell, who has been committed to the psychiatric hospital for a third consecutive week, says the 22-year-old woman is “not crazy” but has “a mental issue”.

The woman also said that Farrell spoke the truth when she said she was in a relationship with Minister of Finance, Camillo Gonsalves.

The woman did not disclose her name when she spoke to media workers and activists outside the Kingstown Magistrate’s court where Rickie Burnett became the second magistrate since Jan. 5 to remand Farrell to the Mental Health Centre.

Farrell’s sister burst into tears as her younger sibling left in a vehicle with six police officers for the health facility in Glen.

Farrell was sent back to the psychiatric hospital while Burnett considers arguments from defence counsel Grant Connell and Director of Public Prosecution, Colin Williams about whether to accept a psychiatric report which says she is unfit to stand trial on an abusive language charge.

The DPP is also asking the court to remand the woman to the psychiatric hospital for further treatment, a move that the prosecution opposes.

Asked what type of mental health issue, the woman said, “That is personal. … But ah know for a fact she ain’t crazy. Unfair! Unfair!”

Farrell’s behavior in court on Monday, was in stark contrast to the quiet and composed person who appeared before Magistrate Bertie Pompey at the same court on Jan. 5.

During her arraignment, she pleaded not guilty to a charge that the previous day, in Kingstown, she used abusive language, to wit, “you dirty b***h” at Karen Duncan-Gonsalves, wife of Minister of Finance, Camillo Gonsalves.

Farrell claimed in videos posted to the internet on Jan. 6 that she had a sexual relationship with Camillo, which ended in 2016.

The older sister said that Yugge has spoken the truth about a relationship with Camillo.

“Yes, she and Camillo was in a relationship. That is the whole thing about it.”

Asked if she had proof, the woman said, “I refuse to say anything about it.”

It was noted to her that she was making an allegation and the woman said, “Yes, I could. It have (sic) witness, persons who saw the two of them when they were going out. When she was living certain places, who was paying the rent for her? She has a lot to say but everything is being covered up. Alyo wah call me crazy? Say I crazy too.”

The woman said she and Yugge do not live together. Asked how she knew about the claims she was making, she said:

“Well, there are just some things that some people say is best left unsaid.”

During Monday’s court appearance, Farrell made howl-like noises at least twice in the proceedings and shouted “What?” when the court again remanded her to the psychiatric hospital.

Her sister told the media that Farrell was given antipsychotic medication at the Mental Health Centre on Friday.

“Yesterday (Sunday) when I went out there, she was good, so they had to give she something last night,” she said.

The section of the Mental Health Act that allows for Farrell’s involuntary hospitalization, speak to evaluation but is silent on treatment.

The older sister said she does not know who had prescribed the medication for Farrell.

“Dr. [Karen] Providence told my mother [Gailene Farrell] that she (Yugge) is not fit to come to court but I don’t know if Dr. Providence is a psychiatrist to give them kind of information out. Anytime I ask them anything, nobody is saying anything about my sister.”

It emerged in court on Monday, that Farrell was also given antipsychotic medication when she was warded at the Milton Cato Memorial Hospital in Kingstown, the nation’s main health care facility.

Lawyer, human rights activist, and opposition politician Kay Bacchus-Baptiste, who was in court during Monday’s proceedings, then asked Farrell’s sister about the whereabouts of their mother.

The woman said she did not know.

Bacchus-Baptiste said this was odd since the mother had come to see her at her office last week with tears in her eyes.

“And what the mother said, the girl asked for pizza, the mother took pizza for her on Thursday, she went back out to see her on Friday. The girl was saying that she should have been released; she was looking forward to being released.

Meanwhile, Farrell’s sister said that Yugge should not be treated this way.

“Because she speak the truth? Because of wha’ going on? This is unfair.”

Asked what she meant by what is going on, the woman said, “Wha’ever the country going on because is ah whole set ah sh** going on in this place. And I don’t care. Alyo wah say I crazy? Carry me mental home too leh me meet she, leh the craziness run in the family.

Farrell’s sister is not the only sibling who has been speaking out amidst the ongoing saga.

On Jan. 8, Storm Gonsalves, Camillo’s younger brother, called into Hot 97 FM to saying that Camillo knows of Yugge because she was stalking his family.

Camillo has remained silent on the matter, apparently heeding the advice of the prime minister, who is also his father, not to say anything yet, and to maintain a “dignified silence” in the interim.