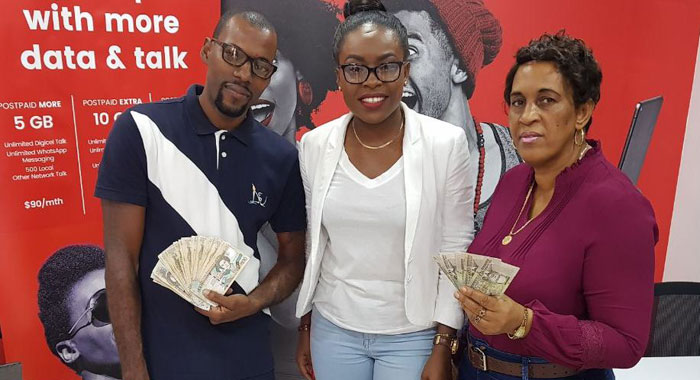 Generally viewed as the hardest month of the year, January is now a lot easier for two very lucky Digicel customers who on Friday walked away with a total of EC$6,000 cash.

Vibert Bonadie of Richmond Hill and Rosemond Daniel of Arnos Vale were all smiles on when they were presented with thousands in cash for participating in Digicel’s 2017 Scratch & Win Christmas promotion.

Bonadie qualified to win after activating a 30-day Quick Pick bundle, while Daniel topped up EC$15 and both received a scratch card to participate in the promotion. After almost 15 years as Digicel customers, the elated winners expressed much gratitude to Digicel, explaining that the cash could not have come at a better time.

Digicel’s Marketing Executive, Jamisha Wright, in presenting the winners with their prizes, said the company intends to reward as many customers as possible through all promotions.

She said that the Christmas campaign did just that and saw thousands of Digicel customers winning groceries, cash, wines, phones, Digicel products and services and more.

Wright added that the decision was taken to reward the grand prize winners of the Christmas promotion in January to help the customers get through the financial challenges during the month.

The marketing executive further explained that Digicel is also assisting its customers during the month of January with its Ease the Squeeze promotion — a campaign designed to allow customers to enjoy at a reduced price the products and services they usually purchase.

Wright said prepaid customers can save up to EC$15 when they activate a seven- or 30-day Quick Pick bundle via the My Digicel app, while anyone who joins the Digicel postpaid family during the month of January will receive two months. Subscription, absolutely