‘Considerable cause for optimism’ in 2018 — Finance Minister 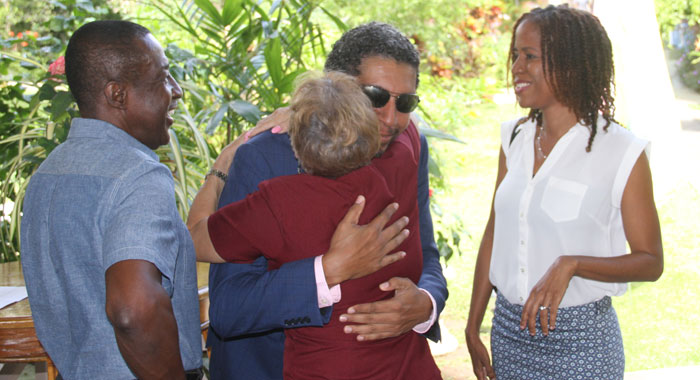 Minister of Finace, Camillo Gonsalves, is greeted on arrival at a Chamber of Industry and Commerce event on Thursday. At right is his wife, Karen Duncan-Gonsalves, while Executive Director of the Chamber, Anthony Regisford is at left. (iWN photo)

Just under two weeks before presenting his first Budget to Parliament, Minister of Finance, Camillo Gonsalves, on Thursday sounded a note of optimism as he addressed the business community in St. Vincent and the Grenadines.

“I am convinced, as are many of the economists in my ministry, that there is considerable cause for optimism about the growth and development prospects for St. Vincent and the Grenadines in the near term,” said Gonsalves, who became finance minister last November, replacing his father, Prime Minister Ralph Gonsalves, who has held the post since 2001.

The minister, however, said there are potential pitfalls as well.

“However, my central message to you today is that St. Vincent and the Grenadines will only maximise its theoretical potential if the local private sector seizes upon the many opportunities that are available in this new leg of our developmental journey,” he said at the Chamber of Industry and Commerce’s first business luncheon for 2018.

The luncheon in Villa came just three days before Gonsalves goes before lawmakers on Monday to ask them to approve the Estimates of Income and Expenditure prepared for his ministry, and pave the way for the presentation of the Budget on Feb. 5.

He said that the global economic and financial crisis of 2008 was followed by the “largest, longest, deepest recession since the great depression of the 1930s”.

However, this year marks the end of the post-crisis decade coming out of the global financial crisis, Gonsalves told business representatives at the event at Beachcombers Hotel.

“Compared to some of our neighbours, St. Vincent and the Grenadines weathered this period in a slightly better manner, without the need for massive job cuts, without the need for IMF (International Monetary Fund) structural adjustment programmes, without debt levels that extended well beyond 100 per cent of GDP, as we saw in some other countries.”

He said part of the nation’s relative success is explained by the adage “the bigger they are, the harder they fall”.

“And we are not that big, so we didn’t fall that hard. But, we also owe a debt of gratitude to my predecessor finance minister for his stewardship of the economy during that stormy period. Not many of our Caribbean neighbours were investing in major state-funded infrastructure projects during the post-crisis decade. They were just trying to pay salaries on time.”

The finance minister was apparently referring to the construction of the EC$729 million Argyle International Airport, which began operating on Feb. 14, 2017, almost a decade after construction began and about six years behind schedule.

“Today, we have come through what we hope was the worst of the storm,” Gonsalves said, adding that the IMF is predicting the strongest levels of global growth of the post-crisis period.

“Both developed and developing countries and economies are looking up,” he said, adding that with the exception of prospective withdrawal of the United Kingdom from the European Union — Brexit, the European Union has moved past the fears of a collapse caused by the difficulties in Greece, Portugal and southern Europe.

“In short, things, globally, are looking up. Here in St. Vincent and the Grenadines, we find ourselves in a position to take advantage of the many key developments that did not exist at the beginning of the crisis.”

He said that this year, Vincentians will see critical new tourism infrastructure and an increase in arrivals, a better-educated young workforce, many new public works projects in various stages of development and the possibility of new opportunities in emerging niche industries in agriculture and fisheries.

“I believe we have crafted a Budget for this year that takes advantage of these new developments and lays the ground work for new opportunities this year and in the year ahead.

“Without saying too much about the Feb. 5th presentation, I can say that the major planks of the budget that may be of interest to you include, firstly, a comprehensive plan for the clean-up of Kingstown and the relocation of vendors to specific areas,” the minister said to applause.

He also mentioned the commencement of the first phase of an EC$90 million road rehabilitation programme; improvement of air access to St. Vincent and the Grenadines via the Argyle International Airport; intensified state involvement in the hotel sector with a view to adding significantly to our room stock; major investments in climate resilience and environmental protection; commencement of the drilling phase of the geothermal energy project; and, expansion of ICT connectivity, particularly to the Grenadines.

The government has commenced and signed contracts for the design of the new cargo port at Bottom Town and a new hospital in Arnos Vale at the location of the decommissioned E.T. Joshua Airport runway.

The government is continuing the planning process for a new city at Arnos Vale and is in discussion with various private sector entities about potential interim use of the E.T. Joshua Airport terminal building, the finance minister said.

In 2018, the Unity Labour Party administration will make significant investments in tactical adjustments to its crime fighting and citizen security apparatus,” he said, noting that the government is giving duty free concessions on closed circuit televisions for businesses.

The government will open the long-delayed Georgetown Medical Complex in a few weeks time and will restructure the administrative apparatus for health care delivery.

The reach of the Zero Hunger Trust Fund, which the minister described as “very successful”, will also be expanded and the government will increase its investments in education, housing assistance, and social protection services.

“A major plank of 2018, which is of interest to the Chamber, and also the private sector, would also centre on tax reform and tax collection. While the details of the tax reform programme will be revealed during the Budget address, I can indicate that non-payment of taxes, especially VAT and PAYE will receive special and aggressive attention in 2018. The government of St. Vincent and the Grenadines is owed over EC$300 million in unpaid taxes and over EC$60 million of that is unpaid VAT, which businesses don’t earn, they collect in trust to hand over, and PAYE, which employers deduct from their employees’ salary.

“It is unfair, and it is wrong for some entities to use this trust money, essentially as operating capital, to the disadvantage of those businesses that actually collect and turn over the money as they should.”

The minister said that in addition to the reforms, some of which he said he believes the business community would applaud, the other side of the ledger is that what the government gives up in the reforms, it anticipates it would get back in tax collection.

“And we will be more aggressive in tax collection in the upcoming year.”

The government is predicting a small surplus on the current account this year before debt servicing, the first such surplus in the country in many years, the minister said.

New construction projects and industrial growth are anticipated to place unemployment, which he said is now slightly over 20 per cent, on a downward trajectory.

“By the time those debt relief initiatives are brought to book, the ratio would have fallen from about 80 per cent to about 72 per cent and that would be the lowest radio we have had since about 2012, 2013,” he said.

7 replies on “‘Considerable cause for optimism’ in 2018 — Finance Minister”