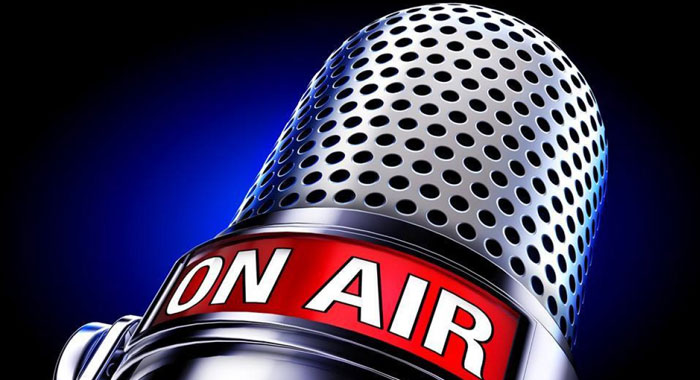 The speaker may have thought that they were having a private conversation.

The announcers and other persons in studio at Star FM, the radio station owned by the ruling Unity Labour Party, might have forgotten on Wednesday an important rule of broadcasting: always assume that microphones are live.

And, in forgetting that rule, they may have inadvertently broadcast an expletive-laced conversation in which they laughed about the ongoing scandal in which model, Yugge Farrell, 22, has claimed that she had an affair with Minister of Finance Camillo Gonsalves, 44.

It is not clear why the conversation went on for more than 30 minutes of the time allotted to the station’s “Street Beat” programme, apparently without anyone calling into the station to point out the apparent glitch.

During one such break, which came after some especially raucous laughter, one of the men in the in-studio conversation speaks about text messages.

“Me ain’ want no evidence, boy,” another man adds as the music stops and the only audio is the in-studio conversation.

“No, for real yuh. Tha’s is where Camillo could geh tie up now, ah nuh. Trust me,” the man said.

The other man disagrees with this position, saying, “Nothing nah even wrong with that. F**k wrong with yo’?”

“Yugge like she cyah mek a f**king bride. Wha’s he fighting up for?” one of the men says.

Another man adds to the conversation, saying, “When yo’ look at Yugge messages, yo’ clearly see this is how it go: she, Milo, the daughter, and the wife is like the, arhm, on the bottom—”

“Yeah. Non-existent,” another of the men adds.

At this point, one minute and three seconds after the music stopped, one of the men asked the other if he was playing music, an apparent reference to the music broadcast as part of the station’s programme.

One of the men noted that no music was being played, but it would be another 17 seconds before the music recommenced.

In the interim, one man said, “She lucky is not Cummings”, as the sound of clicks of a computer mouse are heard.

As the music recommences one of the man says, “Cummings haffi relax he self,” and the music, “Fire go Bun Them”, makes some of the words indiscernible.

Earlier in the broadcast, the men were heard, during another break in the music, testing microphones.

The in-studio conversation that was apparently broadcast accidentally, took place two days after Senior Magistrate Rickie Burnett ordered Farrell to return to the psychiatric hospital for a third consecutive week as he considers arguments by the defence and prosecution regarding a psychiatric report which says she is unfit for trial.

Farrell was arraigned on Jan. 5, before then Kingstown Magistrate Bertie Pompey, on a charge that the previous day at Kingstown, she used abusive language, to wit, “you dirty bitch” to Karen Duncan-Gonsalves, wife of Minister of Finance, Camillo Gonsalves.

After Farrell pleaded not guilty, her lawyer, Grant Connell made a bail application, but prosecutor Police Constable Corlene Samuel told the court that the crown was making an application for Farrell to be sent to the Mental Health Centre for two weeks of application.

Samuel did not give any information in support of her application, which was granted amidst strong objections by Connell.

When Farrell reappeared in court last Monday, Director of Public Prosecutions, Colin Williams, told the court that the Crown was applying for Farrell to remain at the Mental Health Centre for further treatment.

However, Connell objected to this, telling the court that the person who had signed the report was not a psychiatrist.

Farrell returns to court on Monday.