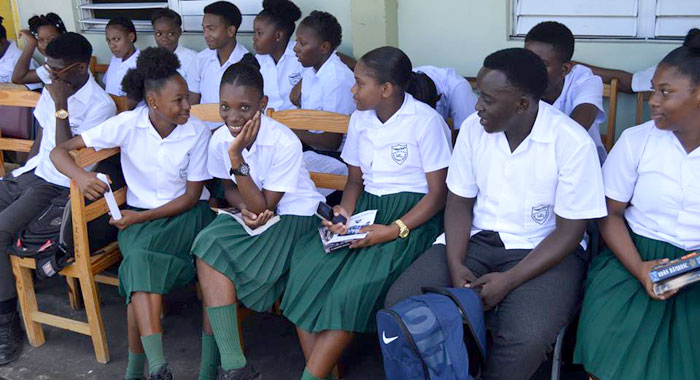 Students of the Troumaca Secondary School at the 45th anniversary ceremony.

Scores of past students joined the staff and students at the institution to commemorate this milestone under the theme “After 45 Years, Tenacity Still Offers Sure Success”.

Giving a brief history of the institution at the ceremony, past student and current teacher, Asbert Garraway, acknowledged that the school was constructed in 1972 with funding from organisations and students in Ontario, Canada.

“The school actually started in October of 1972 under its first principal, Conrad Charles, who had to travel to other communities in North Leeward to register students, but it was in January of 1973 that the school was officially opened,” Garraway said.

Addressing the gathering at the ceremony, government senator, Carlos James congratulated the institution on its milestone.

James noted that the Troumaca Secondary School has always played an integral role in the advancement of education here in St. Vincent and the Grenadines.

“I want the current batch of students to know that this is one of the most important educational institutions in the country and we have had a history of struggle as a people in an effort to keep its doors opened,” James said.

Reflecting on the period of protest in the Troumaca community in 1995, James noted that despite the many successes of the institution, that era was a dark period of struggle.

“This institution has a rich history and a strong legacy, but despite its many successes, attaining this milestone was not easy. Let us remember the nine persons who were arrested, including a 12-year-old boy, when the community protested the planned closure of the institution. This was a backward move which we averted and which I vividly remember as the revolutionary period of this institution,” James said.

According to James, many sacrifices were made, including the implementation of a half-day shift system with the Troumaca Primary School to ensure both institutions remained opened.

“We endured many challenges as a community, but the educational advancement of our people remained paramount. This is the dark period we are coming from as a community,” James noted.

The ceremony also heard addresses from Senior Education Officer for Secondary Schools in the Ministry of Education, Kay Martin-Jack and past students Ian Allen, Julia Haywood and Hayden Ferdinand.

As a part of the ceremony, a number of literature books were donated to the school’s library on behalf of the Regional Integration and Diaspora Unit to mark the school’s 45th year as an education institution.