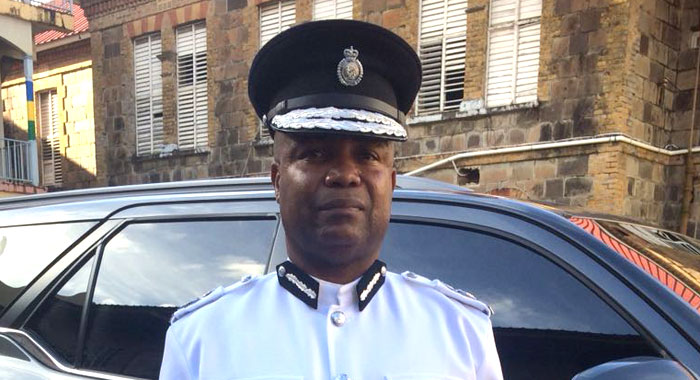 The newly appointed police chief has used his first meeting with members of the constabulary to warn that police officers who do not live up to their calling as upholders of the law would be weeded out.

At a general meeting of the Royal St. Vincent and the Grenadines Police Force at the Old Montrose Police Training School, acting Commissioner of Police Colin John told the rank and file that while more than 95 per cent of police officers are honest, hardworking, dedicated and motivated, “there are a few who are engaging in activities contrary to their calling as police officers”.

He said that such a situation cannot be tolerated because the “few mangy sheep can infect the whole flock”.

The commissioner, a lawyer and former Deputy Director of Public Prosecutions, told the gathering that the Police Force will use scientific means to gather evidence on the “wayward” officers so as to purge them from the organization and deterring other officers from taking a similar path.

John also told the meeting that the police high command had held a retreat and out of that retreat, a strategic plan for fighting crime was developed.

He said the plan is still in its draft stage but will be circulated throughout the organization for input and feedback because the police hierarchy intends to implement it by the end of the first quarter of 2018.

On the issue of performance appraisal in the police force, John said that a committee will be set up to evaluate officers’ performance with the intention of scientifically assessing persons for promotion.

He also congratulated the staff of the Calliaqua Police Station on their recent success in stemming a series of burglaries that were occurring in the district.

The commissioner stressed the need for every police officer of all ranks to report for duty and to be on time. He highlighted some instances where some officers were reporting sick and then producing sick leave certificate from a physician.

He asserted that this practice must stop immediately.

The commissioner reported that the Be-Fit Movement Fitness programme for Police Officers will continue and urged more persons to enrol. He reiterated that it is more personally rewarding for individuals and for the organisation in general when police officers are healthy.

He also informed the members that “police week” will be reintroduced into the Police Force’s calendar of events and that there will be a competition within the organization to formulate a motto for the Police Force.

Joseph impressed upon the officers that community policing and intelligence gathering are the new paradigms in 21st century policing.

He stressed that police officers have to engage the public more if they want to prevent and solve crimes at a much faster rate.

Joseph said police officers cannot solve crime by staying in police stations, but, rather, have to go out in the streets and into the districts to investigate and get the intelligence to solve cases.

The deputy commissioner also announced a series of reforms set to take place in the organization with regard to the curriculum at the Police Training School and the force’s recruitment and selection policy.

These reforms, he said, are geared towards improving the overall standard of service and policing to the general public. The current policy is that when one is recruited into the police force, that individual takes the oath of office and is sworn in as a police officer before entering the Police Training School.

The recruited police officer then enters the Training School where s/he undergoes a series of tests and examinations among other evaluations to judge his continued suitability to remain in the organization.

Meanwhile, Sampson expounded on the need for proper use and care of the organization’s resources, namely motor vehicles and stations. Benjamin reminded the officers about the importance of knowing the mission, vision and core values of the organization, while Caine spoke on the issue of operational synergy between the Police Force and the Coast Guard.

During the meeting, the rank and file also had the opportunity to make recommendations, highlight issues affecting their work and ask the commissioners questions. The rank and file raised several issues relating to promotions, training, and, among other things, force policies and procedures.