What would Trump call St. Vincent? 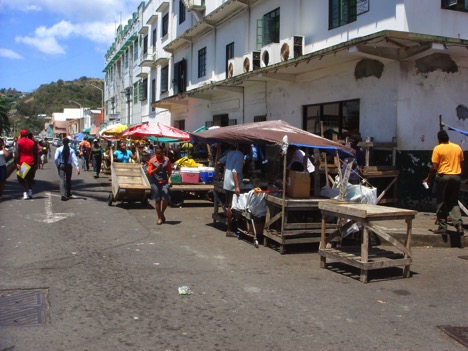 I first heard the term “shitty” used to refer to our mainland nearly 50 years ago. My older brother revealed that some white acquaintances of his who had fled Trinidad for America during its “Black Power” days said this is what Trinidadians often called our beloved island of St. Vincent. Since there were thousands of Vincentians living and working in Trinidad, migrants forced to leave home because of economic adversity, I assumed that this disparaging term must have come from them, if only because relatively few Trinidadians have ever spent much time here.

Our inability to meet the economic needs and aspirations of our people including even many of our white masters during the latter years of the sugar-based slavery era — a determinative natural result of our small size and lack of resources except hilly farmland — has always been with us.

Since the end of slavery and the decline in sugar cultivation and profits, which also marked the end of our highest level of endogenous prosperity, our mainland has bounced from pillar to post exploring one economic strategy after another: export agriculture, light factory manufacturing, telemarketing, offshore banking, and tourism. None of these efforts have succeeded in transforming our society into a highly productive and prosperous one.

Instead, our lower-middle income status is propped up by monies from external sources: remittances from tens of thousands of migrants working in much richer countries; grants from various government and public agencies; and loans. If these outside sources of funds suddenly disappeared, we would quickly nosedive to mass poverty.

This is partly why many of our own people, at home and abroad, often use very disparaging language to describe our mainland and its people: poor, stagnant, boring, corrupt, lazy, lawless, nasty, dirty, rusty.

More particularly, many of our own citizens habitually refer to our capital city, Kingstown, as a “shithole” full of ugly or dilapidated buildings and scruffy people.

Likewise, many commentators have described, often using revealing photographs, the widespread dumping of garbage in rivers and on public and private lands, together with the decrepit state of our roads, rivers, and private and public buildings.

Even Buccament Bay resort, the now thorny crown in our collection of mainland tourism jewels, is quickly turning into nothing short of a shithole replete with a rickety entrance bridge, broken pathways, decaying and moldy buildings, garbage dumping, and the gradual return of the indigenous black sand.

This last trait was just pointed out by Jomo Thomas in his Jan. 12, 2018 The Vincentian newspaper column where he argued:

“I am not that old, but I remember the times when all of SVG was teeming with ideas, conversations, discussions and arguments; when everyone held fast to their beliefs but was willing to put them up to investigation and inquiry. Debate was everywhere, and it was not a test of debating skills. It was a test of ideas about what was wrong with society and what was to be done to take the country forward…. Group think should be frowned on because it is a form of mind control that attempts to choke off inquiry…. SVG has become an intellectual wasteland. The time has come for us to fertilize our minds again.”

Those who claim that all our woes are rooted in slavery and colonial/post-colonial exploitation need to offer evidence that we would be a far more developed country today if British colonialism and slavery had never taken place. In doing so, they would also have to tell us why life in St. Vincent, whether it concerns intellectual curiosity, crime, or the state of our rural and urban environments, have all deteriorated since independence in 1979.

Conversely, they would have to explain why scores of countries and regions around the world that never experienced foreign colonialism and slavery, including many in Africa deliberately ignored by Walter Rodney in his influential but deeply flawed polemical book, How Europe Underdeveloped Africa (1972) (which has been called “bad history” and “dishonest”), are far poorer and more underdeveloped than we are.

Finally, they would have to tell us why some of the richest places of earth — Bermuda, British Virgin Islands, Cayman Islands, Curacao, Puerto Rico, Saint Martin, and Turks and Caicos Islands — are former slaves societies still ruled over as colonial possessions.

8 replies on “What would Trump call St. Vincent?”