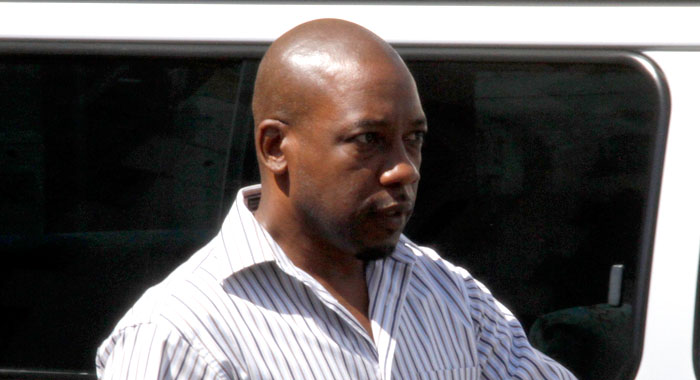 Former journalist Junior Jarvis has pleaded not guilty to murder in relation to the Feb. 14, 2017 murder of banker Randy Lawrence, 39, who was shot and killed in Arnos Vale over what has been presented as a love triangle including Jarvis’ then-girlfriend Arisha Pompey.

Jarvis was arraigned at the High Court on Tuesday before Justice Brian Cottle.

The 45-year-old public relations consultant also pleaded not guilty to six other counts, including the attempted murder of Josette Smith and abduction of Pompey.

The other charges were two counts of use of a firearm to aid in the commission of an offence, and one count each of aggravated burglary.

He has also been arraigned on a count of assaulting and causing actual bodily harm to Pompey.

The Crown is alleging that Jarvis murdered Lawrence several hours after they had an argument at Chill Spot, an entertainment venue in Arnos Vale.

The accused man is said to have then gone to Smith’s house with a licensed firearm he had acquired five days before the shooting.

He is accused of attempting to murder Smith by discharging the firearm at her, and using the firearm to take Pompey from the House to the area of Options Supermarket, located in another section of the suburban community, east of capital Kingstown.

Jarvis, who was represented by counsel Israel Bruce during the preliminary inquiry, at the end of which he was committed to stand trial last October, told the court that Ronald Marks will represent him during his trial.

However, Marks was not present in court and the judge observed that this was very unusual, adding that the lawyer also did not have anyone holding for him in the matter.

He asked Jarvis to make proper arrangements with Marks, an apparent reference to ensuring that his lawyer is paid.

Director of Public Prosecution, Colin Williams, who represented the Crown in the matter, told the court that the matters against Jarvis are very weighty and include quite a number of witnesses.

He said that the court had a copy of certain notices on the matter and a particular course has been adopted.

The chief prosecutor, therefore, asked for the matter to be traversed until after Easter.

Jarvis, a father of five, is facing a murder trial four decades after his own father was convicted of and executed for murder.

2 replies on “Media man pleads not guilty to murder”