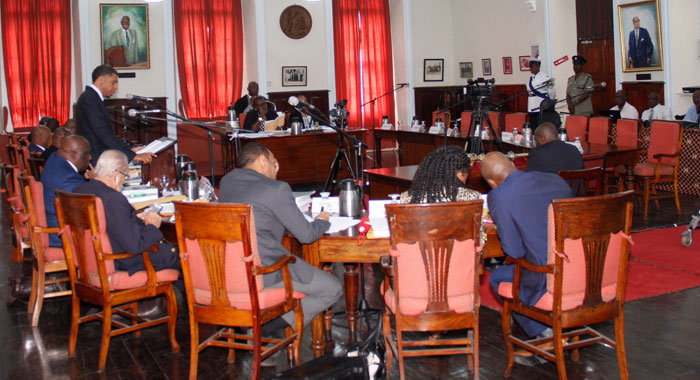 Opposition lawmakers on Monday walked out of Parliament in protest against Minister of Finance Camillo Gonsalves’ continued silence on an allegation by embattled former model, Yugge Farrell that they had a sexual relationship that ended in 2016.

Opposition Leader Godwin Friday led opposition lawmakers in a walk out of the national assembly after he failed to convince House Speaker, Jomo Thomas, to speak on the matter.

When the clerk of the national assembly made the announcement for Statements from Ministers, there was none, so she proceeded to call for reports from select committees.

At this point, the opposition leader rose and told the speaker that he wished to express his “profound disappointment” with the finance minister.

Farrell’s claim about the relationship came one day after she was committed to the psychiatric hospital for two weeks of evaluation after appearing before then Kingstown Magistrate, Bertie Pompey on Jan. 5.

The former model had pleaded not guilty to a charge that the previous day, in Kingstown, she called Camillo’s wife, Karen Duncan-Gonsalves, a “dirty b***h”, which the Crown alleges is abusive language likely to cause a breach of the peace.

Farrell ended up spending an additional week at the facility during which the new Kingstown and Senior Magistrate, Rickie Burnett considered arguments by her lawyer and the Crown on matters relating to her psychiatric report.

Use your powers, Mr. Speaker

Friday told Parliament –which, coincidentally, was meeting in another part of the city as the court proceedings were taking place — that he had raised, in the public domain, the allegation that the former model has made against the finance minister.

He said he has asked the minister — through public means such as radio and a press conference — to make a statement with respect to the allegations made by Farrell.

“There has been no reply outside of the House, but I thought that today that we all here, as elected members, come here to serve the people of this country, that the opportunity under Statements would be taken to provide some clarity on the matter, Mr. Speaker.”

At this point, the speaker said:

“Honourable member, you are rising on?”

“I am asking you, Mr. Speaker, for your indulgence,” the opposition leader said.

However, the speaker asked Friday what was the basis, based on the Standing orders, on which he was rising at that point.

“No, but — I think we are governed by the rules of the house,” Thomas responded.

He continued: “And if you are going to speak, you have to speak in keeping with the Standing Orders and the Rules.”

No permission to speak

“So you are not allowing me to speaker, Mr. Speaker?” the opposition leader responded.

“No. I am saying to you, Honourable Leader of the Opposition, that the Standing Orders govern what happens in the House and if you are going to speak, you have to point — because my understanding, under Statement by Ministers—” Thomas was saying.

At this point, the opposition leader cited Rule 81, saying he was asking the speaker to exercise his general powers.

‘The Speaker should have powers to regulate the conduct of business in all matters not provided for in the rules. The speaker shall be responsible for the management and general administration of the assembly chamber. I am asking you, Mr. Speaker, to exercise your discretion in this case to permit me to make the statement,” Friday read the rule as saying.

However, the speaker told the opposition leader that he saw no basis upon which to permit him to make the statement.

“Well, Mr. Speaker, I am going to make the statement in any event,” Friday, said, adding, as the speaker banged his gavel, “Because I believe that the people in this country deserve to hear a statement from the Minister of Finance on this matter.”

“Honourable Leader of the Opposition, you cannot carry on outside of the rule,” the speaker said and Friday responded that the speaker was refusing to exercise his discretion on the matter.

This is the Parliament. This is where you are allowed to speak, Mr. Speaker, and this is a matter, it is of importance to the people of this country.”

But Thomas noted to the opposition leader that one does not go on speaking “improperly, illegally” in Parliament.

“If you ask me to do something and I point you to the rules and you can’t show me in the rules — because what you point to is not relevant to the point which you want to make, and, as a consequence, I am saying that you can’t proceed,” the speaker said.

The opposition, however, asked the speaker if he was saying that he would not exercise his discretion.

“Honourable Leader of the Opposition, listen to what I am saying clearly. You cannot continue in the way in which you are continuing because you would not be doing so in keeping with the Standing Orders,” the speaker said and again banged the gavel and ask the opposition leader to take his seat.

However, the opposition leader said, “Mr. Speaker, I would simply reiterate we will not continue in this house in normalised conduct which this honourable member ought to address on behalf of the people of this country.”

Deputy Prime Minister, Sir Louis Straker then stood on a point of order, but the opposition leader pointed out that he was on his feet.

The speaker, however, told the opposition leader that he did not want to give way to the point of order although he had no basis on which to stand.

Sir Louis noted that Article 15 of the Standing Orders says that unless the House otherwise resolves, the business of each sitting shall be transacted in the following order, and outlines the order.

The deputy prime minister invoked Article 15 and asked that the House proceeds according to the order in the standing order.

At this point, the opposition leader was still standing and the speaker reiterated that he did not have a legal basis on which to stand.

The speaker asked the opposition leader if he was going to respond to the deputy prime minister’s intervention.

“The business of this House is not normal, today, Mr. Speaker,” the opposition leader said.

As the speaker tried to get the opposition leader to sit, he continued, “Mr. Speaker, I will not stay in this House and normalise that conduct.”

“You can leave, if you want to leave, but you cannot continue in the way in which you propose to continue,” Thomas responded.

“We will leave,” Friday said. “We are not going to stay here and normalise that conduct. And I have in my hand here, Mr. Speaker, I was wondering about the timing of doing this, this is a notice of motion of no confidence in this government, and I am handing it to you now,” Friday said.

After Friday handed the notice to the speaker, he and the other opposition lawmakers walked out of Parliament.

As the opposition lawmakers were packing up to leave, Prime Minister Ralph Gonsalves, rose and pointed out that the speaker had ruled correctly.

“Honourable Prime Minister, I had a clear understanding of the rules and that is why I ruled in the way in which I did,” the speaker said.

The prime minister went to say that the opposition lawmakers did not want to hear the new finance minister deliver the Estimates and had chosen a “bogus excuse” to leave.

“They should be honest, upfront and say we don’t want to hear him speak, rather than to raise a bogus issue as a pretext to walk out. What they are doing, is bringing your own office, Mr. Speaker, into disrepute because they would go out and say all sort of things about you,” the prime minister said.

“That is alright,” the speaker commented.

“And that is why, Mr. Speaker, that I chose to explicitly explain what this rule is, as you have, in fact, correctly ruled, Mr. Speaker,” the prime minister said.

The debate on the estimates is slated to conclude on Wednesday, at the end of which lawmakers would immediately debate the motion of no confidence.