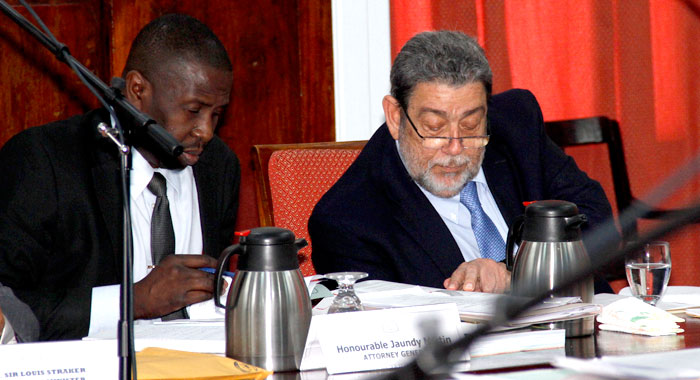 The St.Vincent and the Grenadines Parliament will, on Wednesday, begin debate on a motion of no confidence in the Ralph Gonsalves government.

The debate comes two days after Leader of the Opposition, Godwin Friday, presented the notice to House Speaker Jomo Thomas, just before opposition lawmakers walked out of the national assembly on Monday.

Monday’s meeting included debate on the Camillo Gonsalves’ first Estimates of Income and Expenditure since becoming Minister of Finance, last month, and he presented the figures in the absence of the opposition.

Opposition lawmakers walked out amidst the younger Gonsalves’ continued silence on an on-going scandal in which former model Yugge Farrell has claimed that she and the minister were in an extramarital relationship that ended in 2016.

The alleged affair came to light after Farrell was hauled before the court on Jan. 5 and then Kingstown Magistrate Bertie Pompey granted a prosecution application that she undergo two weeks of psychiatric evaluation at the Mental Health Centre.

The court decision came after Farrell pleaded not guilty to a charge that on Jan. 4, in Kingstown, she called the finance minister’s wife, Karen Duncan-Gonsalves — a senior crown counsel —  a “dirty b***h” at her Kingstown office.

Camillo delivered the figures to Parliament at one area of the city while supporters of the embattled model gathered outside the Kingstown Magistrate’s Court in another part of the capital, where she secured EC$1,000 bail after three weeks in the psychiatric hospital.

Friday’s New Democratic Party, which holds seven of the 15 seats in the 15-member national assembly, has made calls outside of Parliament for Camillo to explain himself amidst the scandal or resign.

But the finance minister seems to be following the advice of his boss and father, the prime minister, to maintain “a dignified silence” and not comment as yet about the scandal.

In Parliament on Monday, Friday did not comment on the grounds on which opposition lawmakers were bringing the motion of no confidence.

In the motion, the opposition lawmakers said that the Gonsalves government “has been failing the people miserably in providing a satisfactory quality of life” and its priorities of the Government in its use of taxpayers’ money have produced totally inadequate health services and basic maintenance of roads”.

The motion says “the collapse of the economy has deprived our youth of hope and employment opportunities” and that there is “a climate of fear through intimidation at all levels of Vincentian society”.

The opposition lawmakers say that the climate of fear has become “widespread due to the manifest abuse of the powers of the State in its institutions, which are often employed as weapons against citizens, to serve the agenda of Government officials, their family members and associates”.

The motion further speaks of “a breakdown in law and order as demonstrated by the incidence of rampant crime and the failure of the various agencies of law enforcement to protect the more vulnerable members of society, including the elderly, women and young persons.

“Be it resolved that this Honourable House declares No Confidence in this Unity Labour Party Government of Prime Minister Dr. Hon. Ralph Gonsalves.”

The finance minister presented the Estimates in the absence of opposition lawmakers.

In moving the suspension of Parliament, Prime Minister Gonsalves said he was made aware of the motion through the statement of the Opposition Leader during the meeting of Parliament.

“I would wish this motion to be heard speedily. We do not do like some other places, duck and run from motions of no confidence because I’m quite sure that the eight members on this side are more than seven members on the other side and all eight members have confidence in the government. So that, Mr. Speaker, motion is doomed to fail,” he said, noting that the Constitution makes it clear that only parliamentary representatives can vote on a motion of no confidence.

“I would wish to get this motion out of the way. My colleagues haven’t seen the motion. And I’d hope before we leave today that we can have it circulated.”

Gonsalves said that Tuesday would be too soon to respond to the motion because lawmakers need to study it to be able to respond.

He said on Thursday there is a programme for a visit of the foreign minister of Taiwan.

The prime minister further said that he worries that if the motion starts on Friday, it might not end in time for the commencement of the Sabbath for the Seventh-day Adventist MP, which begins at 6 p.m.

He, therefore, recommended the suspension of the motion until Wednesday, when two other members of the government side will debate the Estimates.

The debate of the motion will commence immediately thereafter.

“We don’t set a particular time for it since we don’t know when the debate is going to be finished. So it’s on the Order Paper.   There would be an Order Paper in accordance with the Standing Orders of the House. The Estimates would be there, and then the vote of no confidence.”

The government must debate the motion within seven days, and political observers have noted that the government would be minded to get it out of the way before the new finance minister presents his first budget, scheduled for next Monday, Feb. 5.

The prime minister noted to Parliament that the Constitution says if notice in writing of a motion of no confidence is given when the House is meeting, it must be disposed of within seven days.

The debate, which would go late into the night, would begin on a day when the NDP had planned to have a rally in Kingstown to highlight what it sees as the government’s failures.