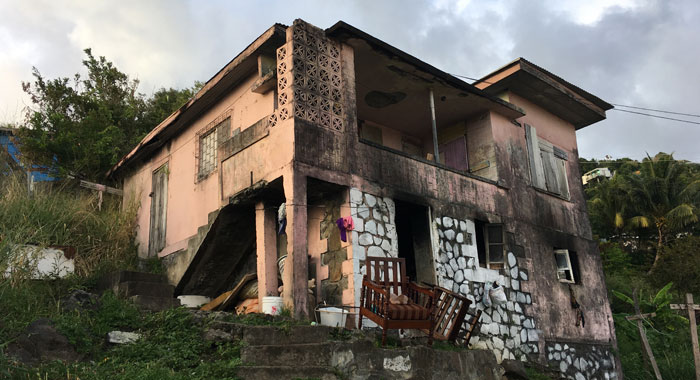 The mother of the child who died in the house fire at Upper New Montrose on Friday has been denied bail on a child abandonment charge.

Tamara Lavia, 28, who is originally from Lowmans Hill was denied bail and remanded into custody until Feb. 18, when she is slated to reappear before chief Magistrate Rechanne Browne-Matthias at the Serious Offences Court in Kingstown.

However, iWitness News understand that the woman could be charged soon in connection with the death of her 8-month-old baby, who died as a consequence of the fire.

On Monday, Lavia was denied bail on a charge that she abandoned her 1-year-old child, she being a child under the age of 2 years.

Lavia was also charged with abandoning her 8-month-old son, he being a child under the age of 2 years.

Police said Monday that they are investigating the circumstances surrounding the fire that damaged the 15’x30’ two-storey concrete dwelling house.

The ground floor of the house was occupied by Lavia, and her four children aged 6 years,  three years, 18 months, and 8 months.

Casilda Bobb and her two children occupied the upper floor of the house.

Police said that their information is that Lavia’s children were left alone at home in a bedroom with a single candle burning on a chest of drawers while their mother went to Heritage Square, a popular night spot in Kingstown.

Based on the hypothesis from the Fire Department, the lighted candle started a fire about 10:15 p.m. in the bedroom where the children were.

On arrival at the scene, the Fire Department was able to contain the fire and has expressed appreciation to the persons who used buckets of water to try and contain the fire prior to their arrival.

The eldest child ran out of the house to seek help and escaped unhurt as a result.

The youngest child sustained burns to 90 per cent of his body and succumbed to his injuries at 4:10 am at the Milton Cato Memorial Hospital later the same day.

A post mortem will be conducted on his body.

The two other children sustained light burns about their bodies.