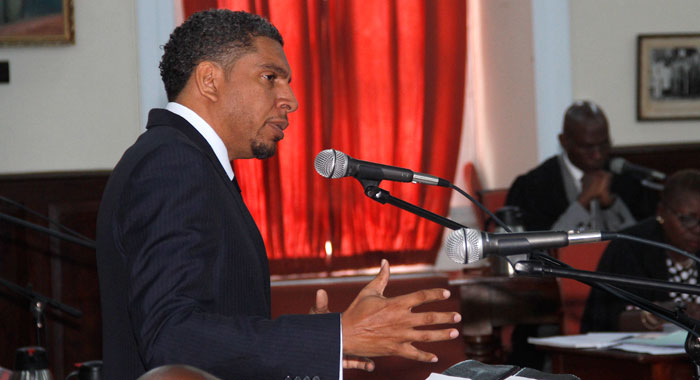 The new Minister of Finance Camillo Gonsalves, has told Parliament that he has tried to be  “realistic and honest” about the capital budget that his government hopes to implement this year.

On Monday, Gonsalves presented to lawmakers Estimates of EC$993,535,449, which represent a 1.7 per cent increase over the approved budget for 2017.

The finance minister said that when the Budget is discussed, beginning next Monday, he would have more to say about the way in which his government intends to implement the capital budget.

He said his ministry has tried “to be realistic and honest with the people of St. Vincent and the Grenadines about what we can do in a year and what we plan to do with the capital budget”.

Camillo, who took over from his father and prime minister as the finance minister last November, highlighted four new initiatives in the 2018 budget.

The first was changes to the ministerial portfolio announced in 2017.

He noted that the Minister of Economics and Planning, etc. was subsumed under the Ministry of Finance, Economic Planning, Sustainable Development and Information Technology, which he heads.

The portfolios of Labour and Industry have been transferred to the Ministry of Agriculture, Rural Transformation, Forestry, Fisheries, Industry and Labour, under the leadership of Saboto Caesar.

The portfolio of Information now falls under St. Clair “Jimmy” Prince’s Ministry of Education, National Reconciliation, and Information, which also has Sen. Deborah Charles as a junior minister.

A new programme called Public Information Services was established for this portfolio.

Gonsalves said the Agency for Public Information and the National Broadcasting Corporation, two state-owned media entities, are consolidated under this new programme.

“And I know that the minister, who has some experience in media and information would be able to share more with the general public about this new configuration in information for 2018,” he said of Prince, a former director of API

Gonsalves further noted that the responsibility for Postal Services has been transferred to the Ministry of Transport, Works, Local Government, and Postal Service, under the leadership of Sen. Julian Francis.

3 replies on “Finance minister ‘realistic and honest’ about capital budget”