‘You talk at the appropriate time’ — Camillo 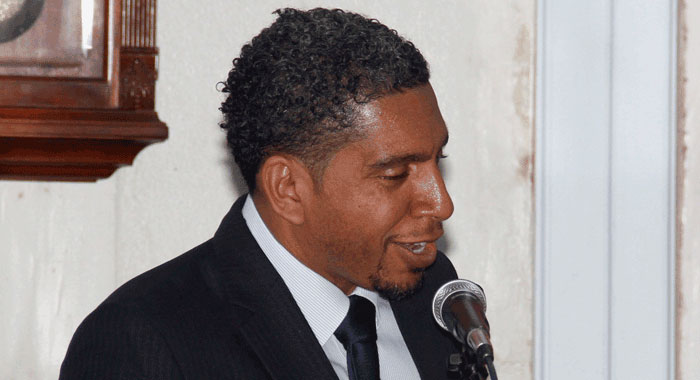 Minister of Finance Camillo Gonsalves, on Monday during his presentation of the Estimates of Income and Expenditure for 2018, made two statements that some political observers say could be interpreted as hinting at but does not address the sex scandal in which he is allegedly involved.

Former model Yugge Farrell, 23, who has been charged with using abusive language at the finance minister’s wife, Karen Duncan-Gonsalves, has claimed that she had a relationship with him, which ended in 2016.

The finance minister has remained silent on the allegation notwithstanding public calls by some factions in the country, including the parliamentary opposition for him to comment.

His silence continued on Monday marking an unsuccessful attempt by Opposition Leader Godwin Friday to use Speaker of the House of Assembly, Jomo Thomas to get the minister to comment on the scandal.

Gonsalves, who became finance minister last November, told Parliament that there has been a bit of a changing of the guard at the ministry.

“And I am not talking about my own assumption of this very important portfolio,” he said.

He said the former Director General of Finance and Planning, Maurice Edwards, “who served with distinction across multiple administrations and for decades” has retired.

He is now serving in a consultative capacity and in his place “and benefitting from a long apprenticeship” is Edmund Jackson.

Similarly, ascending to Jackson’s former position of Budget Director, is Ken Morris, “who has also benefitted from the tutelage of Maurice and of Edmund, and, indeed, the Honourable Prime Minister,” the minister said.

“And just as they were moving into this new post, they were saddled with a new finance minister and I appreciate them holding my hand and guiding me through this process over the last few weeks.”

He said he was not sure how much of a debate there would be in Parliament that day, a reference to the absence of opposition lawmakers, who had walked out in protest earlier.

“I was once told that you haven’t arrived until you can make them depart. So maybe ah reach,” the finance minister said.

He said the debate on the Estimates, unlike the Budget could be a bit dry.

The second apparent reference to the scandal came as the minister discussed the reduction in the nation’s external debt after several loans were repaid and debt forgiveness received for others.

Among those loans, are monies outstanding to the ALBA bank, which declined by EC$88.1 million partly on account of EC$81 million of debt forgiveness granted by the government of Venezuela.

This loan was for construction of the Argyle International Airport.

The government and people of St. Vincent and the Grenadines are extremely grateful to Venezuela for “this selfless act of kindness and solidarity” the finance minister said.

He said the debt forgiveness placed the debt on AIA at EC$320 million.

“Many of you, when you buy a house, you put down 20 per cent and you have debt for 80 per cent. Here we have a billion-dollar asset where only 30 per cent is debt and 70 per cent belongs to the government and people of St. Vincent and the Grenadines already.”

He thanked Prime Minister Ralph Gonsalves for securing debt relief for SVG and other ALBA members across the Caribbean.

“Mr. Speaker, for a long time, and more of this will be discussed in the appropriations Debate – we held our tongue while people talked about debt on airport. ‘Debt is going up.’ ‘We have to account for this debt.’ ‘Explain this debt.’ ‘It’s skyrocketing.’ ‘It’s spiralling.’ We already knew that we were going to get this $81 million in debt forgiveness from ALBA but it was not the opportune time to disclose that. So we leh them talk. And in all things, you talk at the appropriate time, not when they try to draw you out,” the finance minister said.

The debate continues tomorrow, Wednesday, on the EC$993,535,449 Estimates, which represents a 1.7 per cent increase over the approved budget for 2017.

It is the first Estimates that include a surplus on the current account that the Unity Labour Party administration has presented in years.

Also during today’s (Wednesday’s) resumption of Parliament, lawmakers will debate a motion of no confidence in the Gonsalves government brought by opposition parliamentarians on Monday.

Parliament is expected to approve the Estimates today, paving the way for the presentation of the budget next Monday, Feb. 5.

5 replies on “ ‘You talk at the appropriate time’ — Camillo”