Mr. Speaker, your philosophical position is blinding you’ — PM 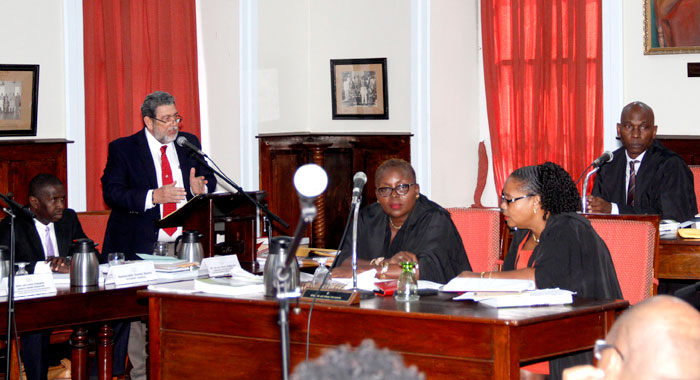 Prime Minister Ralph Gonsalves, on Wednesday, accused house Speaker Jomo Thomas of being prevented by his “philosophical position” from ruling “sensibly” on whether to allow debate on a motion of no confidence brought by the opposition.

“But Prime minister, hold right there… If you are saying that we are going to allow a minority to dictate what happens in the house, you are saying — and I fundamentally disagree with you — that the opposition in this house can never bring a motion of no confidence,” Thomas told the prime minister during an intense three-hour discussion on how the house should proceed on the motion.

The prime minister, however, denied having said this.

“Mr. Speaker, with great respect, I have not said that. I have already said that opposition can bring a motion of no confidence if the government acquiesces or agrees. Secondly, if the opposition has the majority in the house, it is a vote of confidence, and, thirdly, if you go past 21 days.”

Gonsalves said this is why he had said earlier that the Parliament may well have arrived at a point where the Attorney General should put the matter to the High Court for an opinion.

The prime minister successfully road blocked the motion of no confidence by securing an amendment that effectively turned it into a motion of confidence in his government.

Government lawmakers then debated and passed that motion in the absence of the opposition who did not return to Parliament for the post-luncheon debate.

“But I honestly don’t see why we should detain the conversation on the vote of no confidence. I recall when you were here on Monday, you did say, and I have no reason to doubt that arithmetic that this vote of no confidence would fail… And having arrived at that conclusion, I think we should now go into a debate of the motion,” the speaker said.

Gonsalves had argued to Parliament that the St. Vincent and the Grenadines Constitution was unique in the Commonwealth Caribbean in that the section on no confidence motions was written to prevent the opposition from paralyzing the parliament with successive motions of no confidence.

But the prime minister, when he was in the opposition had brought motions of no confidence against the government, all of which were debated, including one that went to debate while there were only three opposition lawmakers.

Gonsalves claimed that he was able to secure a debate because the government acquiesced.

“Which of the philosophical positions?” the speaker asked, calmly.

The prime minister responded: “You just said you have a fundamental difference, because this where you are, you have a philosophical position in that the only way we can have a parliamentary democracy is if the opposition can come at any time and bring successive motions of no confidence.”

“I did not say that either,” Thomas said.

“That is in fact your position,” the prime minister said, an allegation which the speaker denied.

“That is not my position,” the speaker said.

“Because, Mr. Speaker,” the prime minister continued, “You go back selectively to the history and do not look at what the actual law says.”

“No, we dealt with the law before and I respectfully disagreed with your presentation which was made on the law. I don’t have any philosophic position on anything. I take the matters as they come.”

The prime minister had earlier spoken about avoiding mischief of having the parliament turn into a state of gridlock where the opposition can bring motions of no confidence every other week.

“Unless you have this initial step, which has to be overcome, you are going to have chaos in the Parliament,” he said, referring to this claim that the opposition must get majority support before its motion of no confidence proceeds to a debate.

“‘Fiat’ is the word you are looking for,” Member of Parliament for Central Kingstown, St. Clair Leacock, an opposition lawmaker, said when the prime minister paused after saying “initial step”.

Gonsalves said that when the Vincentian constitution was framed, the nation was in a maelstrom of political turmoil.

“Indeed, from Associate Statehood to Independence, there were battles royal in this parliament and the framers would have considered that the way to avoid the mischief is to put this in place in this unique manner, where it does not appear in any other constitution in the Commonwealth Caribbean.”

Gonsalves said that the attorney general had reminded him with a note that the language used is clear.

The Speaker, however, said that while he thought that the prime minister’s submission was sound, he disagreed with it.

“I think that clearly the mischief that you talk about has not manifested itself in the 17 years since the opposition has been in the opposition. It is the first time in 17 years that they are bringing a motion of no confidence. I also think that while your presentation is sound, there is an equally different and sound presentation which says that it cannot be that the speaker of the House of Assembly cannot summon the House and get the house to debate a motion without the government’s acquiescence.

“And based on having heard you and that fact that in 1969, the Law Commissioner of the United Kingdom called for a purposive interpretation of statutes and law, in 1993, the House of Lords voted … that interpretation should be generous rather than legalistic and later, in the privy council, says that we should avoid what the court then called “the austerity of tabulated legalism.”

In a post on Facebook on Thursday, the speaker said he erred when he allowed the government to amend the opposition’s motion of no confidence in the government.

“There is no way a constitutionally mandated provision can be negatived by an amendment. Once I ruled that the motion could not be voted down before a debate the only other thing left was for the debate,” Thomas said.

8 replies on “Mr. Speaker, your philosophical position is blinding you’ — PM”