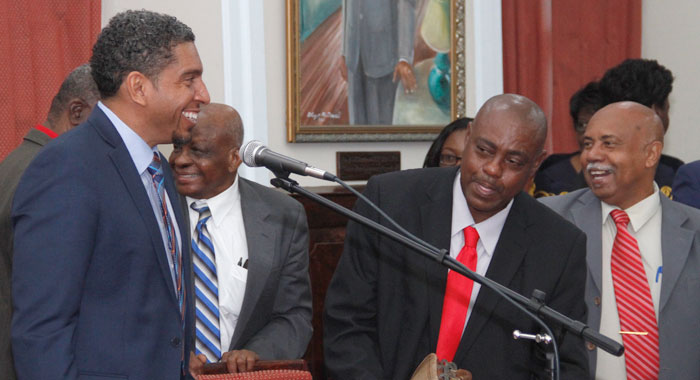 Minister of Finance, Camillo Gonsalves, left, is congratulated by his colleagues after his Budget Address Monday night. (iWN photo)

Vincentian workers and businesses will, this year, see a reduced tax burden while a Climate Resilience Levy will be imposed on visitors to the country.

These were some of the fiscal measures Minister of Finance Camillo Gonsalves announced Monday in his first Budget Address since taking over that portfolio last year.

The change in the tax regime will see the government losing EC$12 million in revenue, which the minister warned that the government will not simply forego, but will recoup by clamping down on tax defaulters.

“The government is committed to reducing the tax burden on Vincentians while simultaneously ensuring that those who flout our tax laws are given an opportunity to choose between regularising their arrears or facing the full range of legally available enforcement measures,” the finance minister told parliament.

“Additionally, we intend to implement a series of legislative and administrative enhancements to our tax-collection apparatus to optimise efficiency and fairness,” he said.

The EC$993,535,449 Budget, which, like the Estimates one week earlier, was presented in the absence opposition lawmakers, who walked out of Parliament, will also see value added tax (VAT) on domestic electricity consumption kicking in at 150 units rather than 200.

The budget will also ban the importation of used vehicles older than 12 years.

Gonsalves announced that the standard rate of company taxes will be reduced from 32.5 per cent to 30 per cent, costing the government EC$5.1 million.

He noted that these rates of taxes were 40 per cent when the Unity Labour Party (ULP) administration came to office in March 2001.

The income tax rate for hotels has been reduced from 30 per cent to 29 per cent.

“This reduction and the special rate for hoteliers is a tangible indication of this government’s continued prioritisation of local hotel growth and development,” the minister said.

The government also announced that it shall raise the standard reduction for personal income tax from EC$18,000 to EC$20,000.

“This means that the first EC$20,000 earned by Vincentians will not attract any income tax,” he said, noting that when the ULP came to office, only the first EC$12,000 was exempt.

The measure will see the government’s revenue intake fall by EC$2.7 million

“These measures continue the commitment of this government to provide economic stimuli via tax reductions and to improve, in practical and tangible ways, the condition of the Vincentian worker. Nationally, the lowering of the tax rate and the raising of the threshold will cost the government approximately $12 million,” he said.

Gonsalves said that prior to 2009, the first full year of the global economic crisis was the last occasion on which some tax relief was provided for the workers and the private sector in respect of profits and personal income tax.

“An internal analysis was conducted and it was concluded that it is time once more to do so. This is accessed to be the occasion for this substantial tax relief.”

The minister said that all told, the government will lose EC$12 million in revenue as result of the tax reductions.

Amidst the lower taxes, VAT on domestic electricity usage will kick in earlier.

As of May 1, the government will reduce the kilowatt threshold for VAT from 200kWh to 150kWh.

“This means that, all VINLEC domestic consumers who consume 150 units or more; just 36 per cent of VINLEC’s domestic customers will now pay VAT.

“This adds only 13 per cent or so of consumers to the potentially ‘vatable’ list. The poor do not consume 150 units per month; so, they would still not pay the VAT. The VAT is payable only on the basic charge, and is not paid on the fuel surcharge,” the minister said.

He said the measure is expected to provide an estimated EC$1 million in additional revenue annually but the government anticipates that as consumers continue to implement more energy efficient measures in their households, the level of electricity consumption would decline, thus reducing the number of domestic customers who will fall within the VAT threshold.

Effective May 1, the government will increase by EC$1,000 the surcharge on motor vehicles older than four years old.

This measure will generate EC$1.2 million in revenue.

The government will also ban, effective May 1, the importation of used motor vehicles that are over 12 years old.

This means that Vincentians would no longer be allowed to import used vehicles manufactured before 2006.

Gonsalves said that over the years, the importation of used cars older than four years into St. Vincent and the Grenadines has increased tremendously.

“The phenomenon has increased traffic congestion and the number of derelict vehicles left abandoned along roadways. For some time, we have resisted taking action in limiting the age of vehicles being imported; the time has come to address this,” he said.

In explaining the EC$8 per night levy to be imposed on stay over visitors as of May 1, 2018, the finance minister told Parliament and media audiences that the Contingencies Fund established by last year’s budget was capitalised by increasing the rate of VAT from 15 to 16 per cent.

Over the eight months of its operation in 2017, the levy capitalised the fund to the tune of EC$6.75 million. This year, the government hopes to collect a further EC$11 million through the fund.

The finance minister said that international financial institutions such as the International Monetary Fund and the World Bank have lauded the government’s decision to establish the “rainy-day fund”.

“However, they have urged the government to seek out additional means to increase the inflows to the Contingencies Fund, given the countries vulnerability to increasing intense adverse weather events and fiscal risks they pose.

“As a prudent and responsible government, we have heeded this advise,” the minister said and announced an EC$8 per night levy to be paid by all stay over visitors in hotels, apartments, and short-term rentals.

The revenue from this measure is estimated at EC$1.7 million in 2018.

The minister said that the fiscal measures being implemented this year have been “judiciously crafted to support the government’s social and economic development agenda over the medium term”.

The 2018 current expenditure, exclusive of Amortisation and Sinking Fund Contribution amounts to EC$617,421,847.

There is a modest current account surplus of EC$4.2 million.