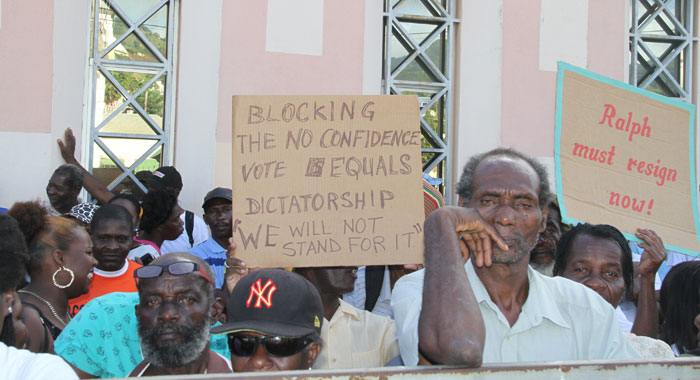 Opposition lawmakers walked out of Parliament yesterday for a second consecutive Monday, this time in protest over a decision that House Speaker Jomo Thomas made last Wednesday to allow the government to amend their motion of no confidence.

Before leaving the assembly chamber ahead of Camillo Gonsalves’ first Budget Address as Minister of Finance, Leader of the Opposition Godwin Friday handed Thomas a letter outlining why opposition lawmakers have decided to boycott the budget speech.

The letter also included legal authorities in support of the opposition’s position that the speaker should have allowed debate on the motion of no confidence.

After walking out of the assembly chamber, opposition members joined supporters of their New Democratic Party who had gathered to protest the Ralph Gonsalves government outside the precincts of the Parliament building.

One of the main issues highlighted on the protesters’ placards was the month-old scandal in which former model, Yugge Farrell, has accused the finance minister of cheating on his wife with her.

Farrell spent most of January in court-ordered psychiatric evaluation after she reportedly called the finance minister’s wife, Karen Duncan-Gonsalves a “dirty b***h”, which resulted in an abusive language charge being brought against the former model.

Speaking to journalist Ashford Peters along the picket line on Monday, Friday said that the letter to the speaker explains the NDP’s position regarding the speaker’s ruling “because we cannot allow it to stay the way it ended in the Parliament last Wednesday.

“You heard me say last week Wednesday night that this matter sets a very bad precedent,” he said, referring to his comment at an NDP rally in Kingstown.

The opposition leader noted that the speaker, at the request of the prime minister and the government side, had allowed the motion to be amended to become a motion of confidence in the government.

He said that what should have happened was that once the matter was properly before the speaker, which he said it was, the speaker should have allowed debate on it.

“If the government survives, then it continues; if the motion carries, the government has to resign. It is either the prime minister resigns or he dissolves Parliament or the speaker could remove him,” Friday said of the possible outcome of a motion of no confidence.

“That’s the consequence. That’s how serious it is. And we were never permitted the opportunity to debate this constitutional motion. So how do we know that the motion would not have carried? Had it carried, they couldn’t present a budget today because the government would have fallen.”

The opposition leader further noted that Minister of Agriculture, Saboto Caesar, when the speaker tried to tell him all government lawmakers would vote against the motion of no confidence, said that the prime minister cannot speak for him.

Friday said there was a similar situation in St. Kitts and Nevis a few years ago when the then Denzil Douglas government did not debate a motion of no confidence

“We have to prevent these dictatorial tendencies from becoming the norm. And then in St. Vincent, this is the same playbook of Douglas that is being used here to stop a motion of no confidence from coming to the house?

“What are you afraid of? If it comes to house debate it,” Friday said, noting that the government says it remains confident that it has the support of the majority in the 15-member parliament.

He said that the motion of no confidence would test that belief.

“… how do you know that the government, as it stands today, is legitimate?

“This, of course, is the same question we are asking with respect to the petitions. The court of course, would decide that,” he said in reference to the two election petitions the opposition has brought challenging the results of the December 2015 election.

The High Court is slated to hand down, this month, a ruling on an application by the NDP to inspect the ballot boxes and other documents used in those elections.

“This one (motion of no confidence) was supposed to be decided in the chambers of the Parliament and we did not get a chance to do so because the government, Gonsalves and the other members of the government got the speaker to rule, against, I would say, his better judgment because I have read since that he had retracted his position.”

Thomas said on Facebook on Thursday that he erred in allowing the government to amend the motion. He noted that the Constitution is the highest law and said that the debate should have gone ahead as outlined by the Constitution.

“But the ruling stands; that you cannot bring a motion of no confidence in St. Vincent unless the government allows that,” he said regarding the effect of Thomas’ Facebook post on his decision in Parliament.

“How ridiculous is that when the Constitution says you only need three members to sign it (a motion of no confidence). If it was that you must have a majority, they would have put it in the Constitution and say you cannot bring a motion unless a majority of the members sign the motion. Not so?”

“You must debate it. You can’t use the rules of the house, which are subordinate legislation, if you will. They are just rules and procedures for the house. You can’t use that to amend the Constitution. That’s essentially what they did there,” Friday said.

“We never got the opportunity to debate it and that is something that everybody should be alarmed about.”

He said a motion of no confidence is a legitimate way of changing a government, adding that it happened in St. Vincent and the Grenadines in 1974, in Australia several times and elsewhere in the Caribbean.

“It is a very fundamental and democratic right that we have to protect. This is so serious, so important. How does the government know that it has a right to bring a budget when it prevented a motion of no confidence from being debated in the house?”

Friday said that he feels bad that the speaker made the error in allowing an amendment to the motion.

“And you couldn’t say we didn’t try. We tried every argument we would in the house and I think we were very persuasive. In fact, the speaker was going with our argument up until the very last minute, when he suddenly changed his position and allowed them to amend the motion.

“… That is negating a constitutional right and what the speaker did in the house encouraged that sort of thinking. So the decision or whatever change of heart he had come to, that will have to materialize or make itself felt in some meaningful way, not just on Facebook,” the opposition leader said.

13 replies on “Opposition writes speaker about no confidence motion decision”