‘It’s beneath you to respond to the people?’ 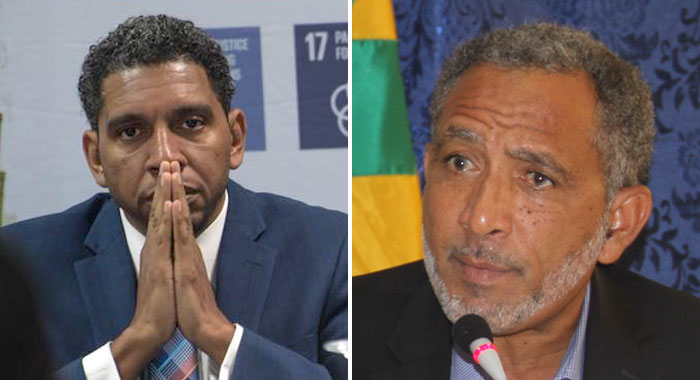 Leader of the Opposition Godwin Friday has explained why opposition lawmakers did not submit to Parliament a question about the Minister of Finance Camillo Gonsalves’ alleged involvement in the Yugge Farrell sex scandal.

Friday told the New Democratic Party press conference on Wednesday that he honestly thought that the minister would have used the “Statement By Minister” segment of the Jan. 30 meeting of Parliament to say what he knows about the saga.

Farrell, a 23-year-old former model half the minister’s age has claimed that he cheated on his wife with her for years.

The NDP has called on the finance minister to explain himself or resign, as the court sent Farrell for three weeks of psychiatric evaluation after she was charged with using abusive language to the minister’s wife.

Amidst the NDP’s repeated calls for the minister to explain himself, they did not include on the Jan. 30 order paper a question about the scandal, a point made on Monday by prominent lawyer, Parnell “PR” Campbell, QC, on his weekly television programme, “The Law and You”.

Campbell said he was surprised that opposition lawmakers walked out of Parliament on Jan. 30 after the minister did not comment on the scandal.

“I found that strange, because there was some agitation directed at the Honourable Camillo, agitating that he ought to make a statement, but not one of them tabled a question to him. I know this is politics and sometimes you don’t discern what the strategies are at the moment.
“But the question that lingered with me was how come they walked out on the ground that he was not making a statement but did not ask him any question.”

Campbell said that his comment was not an indication of his agreeing that Camillo should make a statement.

“Because from what I have read in that saga, no allegation was made against him touching and concerning the discharge of his responsibilities as a minister,” Campbell said.

The finance minister has remained mum, apparently following the advice of his father, Prime Minister Ralph Gonsalves, to maintain a “dignified silence”.

Friday said that the NDP’s repeated calls for an explanation have not been condemnatory.

“We did not judge him one way or the other. We have said, listen you are a public figure, you have an important office, you have a duty to the people to do so.

“He did not do so publicly. He was told, advised, not to do so. Honestly, I am not kidding you here: I thought that he would take the opportunity in the Parliament under the Statements by Ministers, which is on the Order Paper.

“That is the place that screams out to you and that say if I have something to say to the people, this is where I would say it. So, at the very last resort, this is where you ought to say it. And I sat and I waited.”

“I said that’s where it ought to be done as a last resort and I was disappointed, but it was stronger than that, I felt that this was so contemptuous. Here you have a statement by ministers on the order paper.

“It is not my obligation, my duty to bring a question to ask him to say what? To say what you know about the scandal? The first thing they would say, this matter is sub judice, you don’t have any comment about it because the matter involves somebody who is in the court.

“In any event, he has an obligation beyond what I, as the Leader of the Opposition or any member of the Parliament ought to pull and coax out of him.”

Friday said that when he rose in Parliament on Jan. 30, it was to remind the finance minister of his obligation and to encourage him to use the opportunity to make a statement.

“That is much more effective than putting it in writing on a piece of paper and submitting it as a question. I stood up in the Parliament; everybody saw and still, silence.

“But he spoke on behalf of everybody else in the Parliament,” Friday said, referring to the Budget Debate one week later in which only the finance minister spoke, after the opposition again walked out of Parliament.

Friday said that if the minister continues to remain silent, the people will make their judgment on that.

“But we will continue to say that he has an obligation to do so. The people of St. Vincent and the Grenadines, we are not fools. They don’t live, as they said on the placards, they don’t live on anybody’s plantation anymore,” he said.

“What is it? It’s beneath you? Is that what you are saying, it is beneath you to respond to the people?”

Friday said that the finance minister has disrespected the people by refusing to comment on the scandal.

He pointed out that the scandal has attracted international attention and was recently reported on by the New Statesman, a British political and cultural magazine.

“I read that last night with some alarm. Because this is somebody, who I am told, was here as a tourism journalist primarily and got caught up with the stuff that’s the most important story while she was here, wrote this in a British, well reputed, left-wing news magazine called the New Statesman,” he said of the article and its writer.

8 replies on “‘It’s beneath you to respond to the people?’”