After being booed, GG embraces Opposition Leader to show neutrality 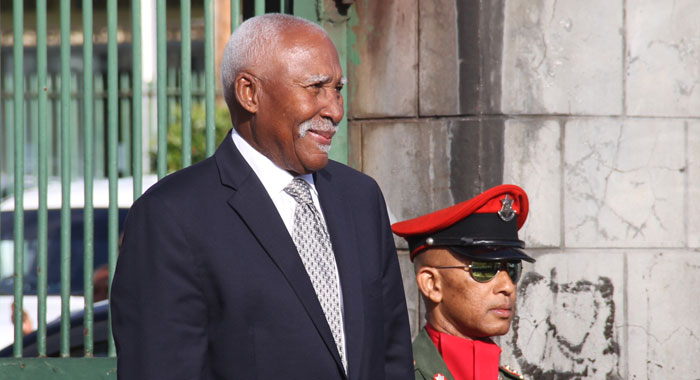 Governor General Sir Frederick Ballantyne is said to have embraced opposition Leader Godwin Friday outside Parliament on Monday to show protesters that he is above partisan politics.

The nation’s ceremonial head of state is said to have made the move after being booed during the formalities to mark the ceremonial opening of Parliament ahead of the presentation of the budget.

Supporters of the main opposition New Democratic Party, which Friday heads, booed Sir Frederick during the playing of the National Anthem and as he inspected a guard of honour in the street outside the parliament building.

Protesters, mainly supporters of the NDP, had gathered behind police barricades outside the venue to express their displeasure with what they say is the Ralph Gonsalves government’s mismanagement of the economy among other national issues.

They also highlighted the treatment of former model Yugge Farrell who spent most of January in a psychiatric hospital after being charged with using abusive language to Karen Duncan-Gonsalves, wife of Minister of Finance Camillo Gonsalves.

Friday was asked at an NDP press conference in Kingstown to comment on what many saw as his supporters’ disrespect of the national anthem and of the governor general.

“When we came out of the Parliament we came down with the governor general — I don’t think he’d mind, because he said it and other persons heard, he said he would put his arm around me when we get downstairs so that the people would see the governor general don’t take sides and I welcome that.

“And, in fact, when he came out of the Parliament, he did that. He put his arm around me and I put my arm around him and we waved to the crowd.”

Friday said that the crowd did not boo at that point.

“If anybody the crowd was upset about, it’s Ralph Gonsalves and the ULP government. That’s who they were upset about. They may improperly vent against the governor general and so on but I think that people, on reflection, would say well, yes, this is not the way we conduct our democracy.”

Friday, however, asked who is the ULP to complain.

He said that while he was not in St. Vincent at the time, he had heard about supporters of Gonsalves’ Unity Labour Party shaking the official vehicle of then governor general, Sir Charles Antrobus’ during the political unrest of 2000.

“We would never tolerate that on the NDP benches,” Friday said.

7 replies on “After being booed, GG embraces Opposition Leader to show neutrality  ”