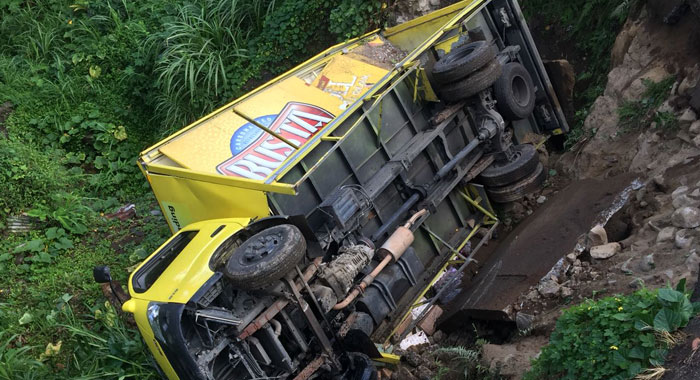 The truck fell into a ditch after the incident. (iWN photo)

The man who drove a sales truck onto a portion of undermined road in Golden Grove, Chateaubelair around 10 a.m. Monday said that he did not know that the road had been closed since 2013.

Bertran Haynes, 43, of Green Hill, told iWitness News that he and his salesman, Melvern Abbott of Georgetown, were following the directions given to them to make a delivery when the incident occurred.

They were travelling from Fitz Hughes to Chateaubelair when they took a strip of concrete road that led to the compromised roadway.

There were no barricades or danger notices at the entrance to or along the portion of road, which had been severely compromised during the floods of Christmas Eve 2013 – which claimed 13 lives across the country.

Haynes told iWitness News that by the time they realised that the road could not bear the weight of the truck, it was too late to even reverse.

When the road collapsed, the truck rolled into a ditch.

Haynes escaped with just a scratch while the salesman complained of pains as a result of blunt trauma sustained during the incident.

The truck, which is owned by Facey Trading, was branded in Busta livery and was carrying a load of the soft drinks.

Haynes told iWitness News that some persons who came to check out the incident, helped themselves to much of the drinks notwithstanding the presence of armed police officers.

He said that by late Monday night, the truck had been towed back to Kingstown, but the wrecking company was forced to leave, at the scene, the pan of the truck which had to be unbolted to make the recovery easier.

One reply on “Truck overturns while driving along damaged road”