Sir James disagrees with ‘stringed quartet’ about no confidence motion 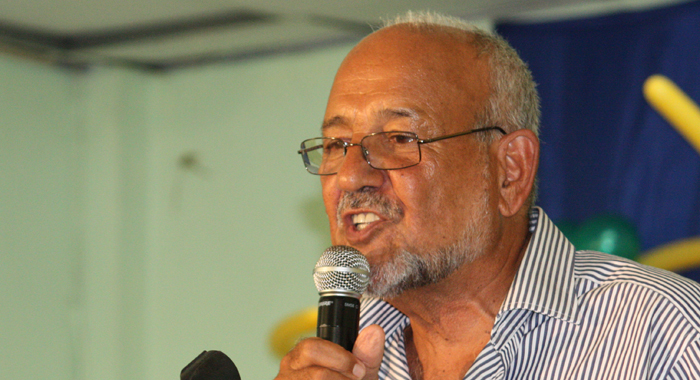 Former Prime Minister Sir James Mitchell says he is concerned about the impact on democracy in St. Vincent and the Grenadines of the failure of Parliament to allow debate on Jan. 31 of the no confidence motion brought by opposition lawmakers two days earlier.

When the motion came up for debate, Prime Minister Ralph Gonsalves presented an amendment, which Speaker Jomo Thomas allowed.

The amendment turned the motion of no confidence — which if it had passed would have seen the government fall — into a motion of confidence, which has no legal or constitutional implications.

The government went on to pass the motion of confidence in the absence of opposition lawmakers, who had stayed away in protest.

The debate surrounds section 47 of the constitution and its interpretation.

Speaking on Boom FM on Wednesday, Sir James said he was involved in the creation of this Section 47, which he said was done during the Statehood conference in London.

“And I remember working on it,” said Sir James, who retired from electoral politics in October 2000.

Sir James faced a number of motions of no confidence in his 35-year career as a Member of Parliament, including 17 at the helm of the New Democratic Party’s (NDP) four-term administration.

He told listeners that he disagreed with the view of his former attorney general, Queen’s Counsel Parnell Campbell that there was nothing wrong with what occurred in Parliament.

He said it would not be the first time that Campbell has been wrong on a very important constitutional matter.

Sir James said that as far as he is concerned, a motion of no confidence is “fundamental to our democracy”.

He noted that one would be brought against Jacob Zuma if he does not resign as president of South Africa.

He said that he saw the references being made by one of the “geniuses” — Gonsalves, Campbell, Alexis, and Lewis – that says that the provision of the subsection shall be without prejudice to the power of the house to provide by its rules of procedure that a motion of no confidence may be given by any member of the house.

“Parliament never made any special rules, so the only rules we have are from the [Standing Orders],” the former prime minister said.

The Standing Orders give permission for Parliament to amend a motion if it is relevant, Sir James acknowledged, but noted that the Speaker and no one else can decide if an amendment is relevant.

“But not to ignore the motion of no confidence and put in a counter motion,” Sir James said.

He said that people should not forget that there were three hours of debate over whether the motion should be debated.

The government should then have been allowed to move its amendment, but should have been called upon to justify every sentence of it, the former prime minister said.

“And the discussion of a no confidence motion is fundamental to our democracy. We had what I call the stringed quartet, the prime Minister, PR, Alexis and Linton. They all became authorities on this whole subject, literally leaving everybody confused,” Sir James said.

They’ve been wrong before

He said that while he respects the four gentlemen, “… they have all, in their own time, in my view, not always been correct on constitutional matters”.

Sir James said he wanted to remind Campbell that when the NDP won all 15 seats in Parliament in 1989, Campbell had told him that it does not look right and suggested that the prime minister should appoint some senators.

Sir James said that Campbell wanted him to appoint two senators, but he noted that he was not the opposition leader.

The former prime minister said that the governor general at the time sided with Campbell, but he told them that he would get an opinion from the Palace and a constitutional expert in London.

The expert and the palace said that his interpretation of the Constitution was correct. Sir James said, noting that Campbell’s position had been informed by advice from the University of the West Indies.

“So, sometimes, these foreign experts in the Caribbean give advice and you can’t rely on what they say…” Sir James said.

He said that Campbell in the most recent case has given precedence to putting a Budget Debate ahead of debate on a motion of no confidence.

Sir James said the only way to prove the outcome of the motion is to debate it.

“Come on! They are all components of the matters relevant in the society at the time that could have been discussed in the Parliament without interfering with the court.”

Political observers say that the motion of no confidence was intended to target Minister of Finance, Camillo Gonsalves ahead of his first Budget, which was delivered on Feb. 5 and passed one day later, with only the minister commenting on the EC$993 million fiscal package.

The minister has been embroiled since January in a scandal in which a former model, half his age, has claimed that he cheated on his wife with her during a years-long relationship that ended in 2016.

Farrell has been charged with using abusive language to the Minister’s wife, Karen Duncan-Gonsalves, and will return to court on Dec. 17, 2018.

She spent most of January in a psychiatric hospital after then Kingstown Magistrate Bertie Pompey upheld an application by the prosecution at her arraignment — without supporting evidence — that she be sent for psychiatric evaluation.

It later became public that Farrell has been treated in the past for mental health issues.

The finance minister, who is the prime minister’s son, has remained silent amidst the scandal that has attracted regional and international attention.

His silence is apparently in response to his father’s advice to maintain a “dignified silence”.

‘the element of fear in our society’

Sir James said that that in principle, a matter that is before the court cannot be discussed in Parliament.

“That doesn’t mean that you can’t discuss the element of fear in our society or intimidation of individuals… You can discuss all kinds of things and you don’t have to mention what is before the court.”

What is before the court is a charge of Farrell having insulted Duncan-Gonsalves, the former prime minister noted.

“Why was the lady arrested? And that question is important that we discus intimidation in this society. It is imperative that we discuss the element of fear of people not wanting yo’ to open yo’ mouth.”

He said he is sure that the prime minister and other people are aware of how dissent was treated in Russia.

“Well, we don’t want any gulag in St. Vincent. And we don’t want to start going down that road. We have to be careful with the protection of our democracy,” Sir James said.

He said he believes that Farrell will win the case and said she should sue the government if she does.