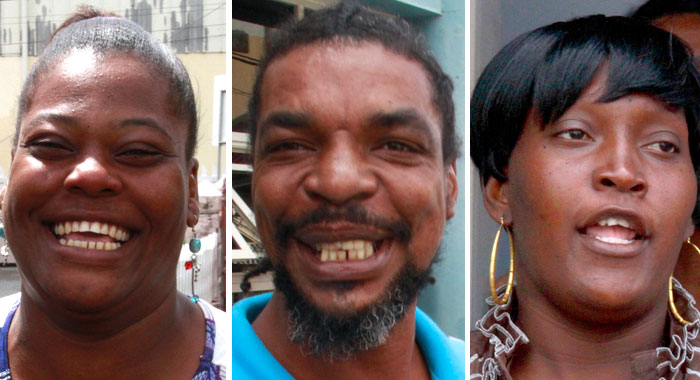 A Redemption Sharpes woman who beat her ex-boyfriend’s new lover has been advised to get a man of her own.

The advice came from Senior Magistrate Rickie Burnett at the Kingstown Magistrate’s Court on Tuesday on the eve of Valentine’s Day — when the world celebrates love.

However, it is not clear if Alister Lyttle, the man at the centre of the love triangle, would allow his ex-lover, Kelly-Ann Degrads, to move on notwithstanding his comments to the court.

Burnett ordered that Lyttle, who was outside the court precincts, enter and listen to the proceedings after Degrads pleaded guilty to three charges relating to his current girlfriend and mother of his 5-month-old child, Afia Richards.

“You have to start over,” the magistrate told the prosecutor Corlene Samuel, who was presenting the facts, after Lyttle took a seat in the court.

Lyttle was sitting in the court when Degrads, who is the mother of two of his children, aged 10 and 5, said that the previous day he asked her for sex at a funeral.

The woman said that while she was keeping her distance from Lyttle as she paid final respects to the deceased before Richards arrived at the funeral, Lyttle came over to her and asked her to get intimate with him.

Degrads pleaded guilty to two counts that she assaulted Richards in Redemption Sharpes on Aug. 8, 2017, causing actual bodily harm and one count of damaging the woman’s property.

The court heard that Aug. 8, Richards was pregnant – with Lyttle’s child — and went to see Lyttle at his house. She was standing in the public road when Degrads came out of Lyttle’s house and started to argue with her.

The court heard that Degrads called Richards a “whore”, grabbed on to her dress and began to pull it, damaging it in the process.

A fight ensued and Degrads struck Richards in the stomach with an object and damaged her weave. Richards sustained injuries during the fracas.

Lyttle intervened by pushing Degrads, who then released Richards.

In another incident on Nov. 17, 2017 about 8:20 p.m. in the Central Kingstown community, Richards was walking home from church when she went to Lyttle’s mother’s residence to collect something.

To do so, she had to pass Degrads’ residence.

Richards had with her at the time, her 10- and 5-year-old daughters. As she was walking home, the older of the children told her that Degrads was walking behind them.

When Richards turned around, Degrads pointed her hands in her face and an argument ensued.

Degrads held on to Richards’ hair and pulled it, causing her to hit the back of her head.

A resident, Timothy Telesford, intervened and separated the women.

The defendant gave police a statement admitting to her crime.

Lawyer Grant Connell, who acted pro bono on the defendant’s behalf when she engaged him in court, noted to the court that the woman had pleaded guilty at the first opportunity.

Connell, in a light-hearted comment, said that from the attributes of the ladies, they have something in common that Lyttle seems to appreciate.

The lawyer was speaking in apparent reference to the physique of the full-bodied women.

He further commented that they had both “borne fruits of [Lyttle’s] labour”.

The lawyer said that he hopes that the actions of the court could bring peace among the three parties, saying that his client has reported to the police that Richards has repeatedly harassed her.

“Both of them with the same man, what do you expect?” the magistrate commented about the ongoing squabble between the women.

“In her own words, she can only take so much,” Connell said and told the court that he doesn’t think that the charges should attract harsh sentences.

“I am sure he can settle that,” Connell said, referring to Lyttle, adding that all three parties still live in Sharpes and the women are still with the same man.

“My friend has suggested time-share,” Connell said in reference to an apparent comment from someone at the Bar table.

He, however, told the court that on a more serious note, he is asking that his client be bonded to keep the peace, adding that she works with the Kingstown Town Board and is a single mother.

Richards told the court that she did not interfere with Degrads, adding that the woman has been harassing her since she (Richards) and Lyttle began to date.

The magistrate noted that Degrads children with Lyttle are significantly older than Richards’ child.

Richards told the court that Degrads has damaged her house and she had to give away her 5-month-old son because Degrads said she would kill him.

“They’re in family court, so why she don’t give me a chance,” Richards said of Lyttle and Degrads, and her hope for her own relationship with the man.

The defendant, however, said that Lyttle is a woman beater and told the court that she had secured restraining orders against him.

She said that she did not want to embarrass him by taking him to court but had been lenient with him during the child support hearing.

Degrads showed to the court documents, which she said she had obtained to protect herself from the man.

She said that she gets no peace from her ex-boyfriend and his new lover.

The magistrate said that he wanted to hear Lyttle also on the matter.

Connell, in his usual jovial style, asked where will Lyttle stand, noting that the two women, one the accused and the other the virtual complainant were occupying the relevant docks.

The magistrate said that Lyttle would stand in the middle, behind the Bar table.

Lyttle told the court that Degrads was lying and denied seeing or asking the woman for sex the previous day.

He said that Richards is his lady and he and Degrads have not been together for about two years.

He further told the court that Degrads had emptied his bank account.

But Degrads retorted that Lyttle is lying and asked him how she could have emptied his account and he did not have her arrested if they were not together.

“I don’t want him in my life,” Degrads told the court, adding that she and Lyttle’s relationship ended on Oct. 2, 2017.

The magistrate ordered Degrads to compensate Richards in the sum of EC$160 by April 30, 2018 or spend one month in prison. She was also bonded to keep the peace for one year or pay the court EC$1,500 forthwith or spend two months in prison on each charge.

“Get a man of you own,” the magistrate told the woman.