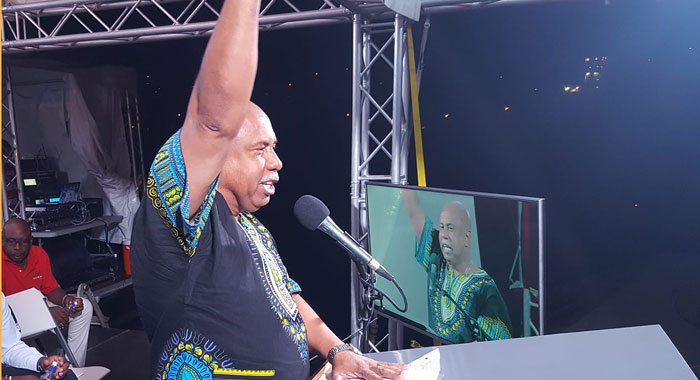 Minister of Tourism, Cecil “Ces” McKie says that one year after it opened, Argyle International Airport has proven to be positively different in five major ways from the E.T. Joshua Airport which it replaced.

“Greater opportunities in terms of connectivity and direct flights out of Argyle International Airport and St. Vincent and the Grenadines. Options to land from any direction here at Argyle… and there have been very few cancellations here at Argyle,” he told a rally in Argyle Saturday night to mark the first anniversary of the opening of the airport.

“Last week and this week, there would have been many cancellations [due to strong wings], if we were still at E.T. Joshua airport,” he said.

McKie said those who have flown into Argyle will know that it is “by far the best approach of any airport anywhere in the region. What a beauty when you come into this facility!”.

He said that the immigration and customs are “easy, smooth and you are out into the open area in a flash”.

The minister said that the “biggest one of them all” is direct scheduled flights to St. Vincent and the Grenadines, which he said was not possible at E.T. Joshua.

He said that in the five months ending in February, Sunwing Airlines did seven return flights from Toronto, brining in 701 passengers, and taking out 549.

EasySky, during the latter months of last year conducted three return flights to Cuba, bringing in 221 passengers and taking out 242.

“It took our neighbours two years to get scheduled flights. We did it in 303 days.”

So far, Air Canada Rouge has done 10 return flights to Toronto. They brought 1,220 passengers to Argyle and took out 1,153, the minister said.

“And I want to tell you that by April, they would have brought in 1,747 passengers to St. Vincent and the Grenadines,” he said.

“And they have signed on to do these flights for three years. In fact, they will be coming in once per week, every Wednesday, and from the 7th of July, they will put on an additional flight on Saturday right into August to cater for the carnival demand and also for the summer demand.”

McKie said that the government is working hard to get other direct flights from the United States and the United Kingdom, saying that these destinations are important to the country.

Local carriers have been working hard to expand their fleet and improve their services, the tourism minister said.

“And they are looking also at the fact that we have a high demand for taking cargo out of St. Vincent and the Grenadines,” he said, adding that Amerijet is now servicing the country with a larger aircraft, which would not have been able to land at E.T. Joshua Airport.

He said that at E.T.  Joshua Airport, there was one hangar while AIA has two large hangars, with the possibility of two more in the not-too-distant future.

“So, you see the difference that the Argyle International Airport has made,” McKie said.