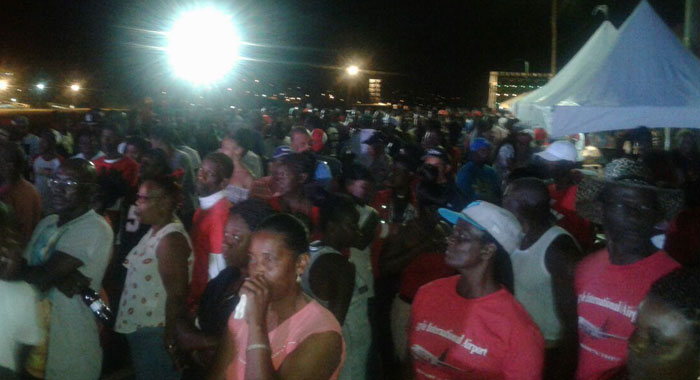 A section of the audience at Saturday’s rally. (iWN photo)

The government of St. Vincent and the Grenadines picked up the tab for the rally on Saturday to mark the first anniversary of the opening of Argyle International Airport.

Opposition Leader Godwin Friday had asked on Friday about how the rally was going to be financed.

The prime minister said that individual persons paid in the communities for buses to transport people to the rally.

“Government ain’t pay for no bus. But, of course, that’s why yo’ see I come in a green pants and a blue shirt and I put on — the youth them tell me I must put on a hat tonight. But, I tell you this, that don’t mean ah cyar do that you know,” Gonsalves said, and raised his right hand.

On his wrist, the prime minister was wearing two wooden bracelets, which he said he got from the Vatican in 2013 and a red one, which he said, “is to keep the company tonight”.

Red is also the colour of the ruling Unity Labour Party.

Speaking at the press conference on Friday, the opposition leader noted that when the airport opened last year, the government arranged chartered flights from Canada and New York and Head of the Tourism Authority, Glen Beache had expressed confidence that the flights would have sold out within an hour of tickets going on sale.

“As we found out, taxpayers paid over EC$700,000 for that exercise in publicity for the ULP government,” Friday said.

“That’s basically what it was. So the question that I’m asking today, ‘Are taxpayers going to be made to pay the bill for this extravaganza that they are planning out at Argyle tomorrow?’

“That is a relevant question given the fact that for the third straight year in a row VAT has been increased on the people in St. Vincent and the Grenadines; more taxes have been imposed, given the fact that we have serious hardships in the economy of this country.

“We need to know, to ensure that government’s money is not wasted on a bashment that is basically just a political advertisement for the Unity Labour Party and part of their campaigning,” he said.