CXC concerned about students not turning up for exams 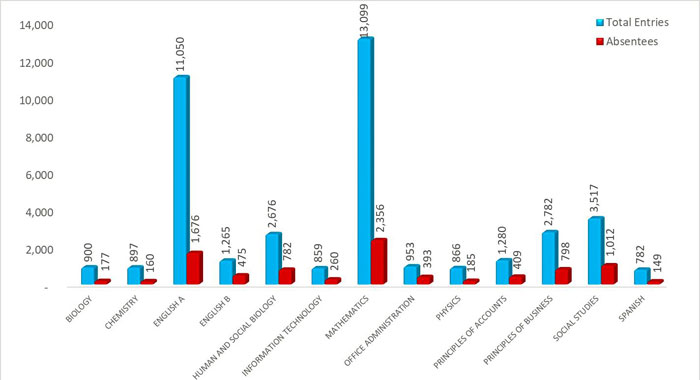 Comparison of absent candidates to total entries by subject in January 2018. (CXC graphic)

The number of candidates who were absent for the January sitting of the Caribbean Secondary Education Certificate (CSEC) is now a cause for concern, say Marcia Potter, deputy chair of the Caribbean Examinations Council (CXC).

Potter, also the Permanent Secretary in the Ministry of Education and Culture in the British Virgin Islands, was speaking as she chaired the 70th Meeting of the Final Awards Committee (FAC) of CXC on Friday 16 in Barbados.

During the meeting, it was revealed that in a number of subjects, many candidates did not show up for their examinations, which were paid for by either the candidates or their governments.

“I am concerned about the number of absentees. It is cause for concern that taxpayers money is being used to pay [for examinations fees] and candidates are not showing up to write the examinations,” Potter said.

Absenteeism has always been an issue in the January sitting, however, this year it was significantly higher in some subjects: office administration (41 per cent); English B (37 per cent); principles of accounts (31 per cent); information technology (30per cent); and social studies (28 per cent).

In noting the issue, Registrar of CXC, Glenroy Cumberbatch said CXC is responding to help candidates better prepare for the January sitting.

The Registrar said CXC plans to provide more detailed feedback to candidates on their performance so that they know exactly their areas of strengths and weaknesses.

In addition, he said the CXC Learning Hub will provide additional resources to candidates to aid their examinations preparation. The Learning Hub is expected to be ready by the end of September 2018.

The overall performance in the January sitting was mixed, with some subjects in the natural science cognate cluster seeing marked improvements while there were declining performance on other subjects.

Performance in biology saw the most significant improvement with 71 per cent of entries achieving acceptable grades – Grades I to III. This improvement was as a result of better performance on all three profiles: knowledge and comprehension, use of knowledge and experimental skills.

Improved performance on all three profiles for information technology resulted in an overall improvement. This year, 72 per cent of entries achieved acceptable grades. Performance in the theory profile moved from 76 to 85 per cent; productivity tools from 63 to 73 per cent and problem solving and programming from 50 to 58 per cent.

Performance on English A remained the same as in 2017 with 56 per cent of entries achieving the acceptable grades, while for English B, 27 per cent of entries achieved acceptable grades this year. The Subject Awards Committee reported that in several cases, candidates scored zero on a number of questions on Paper 02. Some candidates wrote no answers and others simply wrote back the question.

Mathematics continued its downward trend that started three years ago. This year, 30 per cent of entries achieved acceptable grades.

Office administration registered a 2-per cent improvement in performance with 64 per cent of entries achieving acceptable grades this year.

Thirteen subjects were offered in the January 2018 sitting and there were increases in both subject and candidate entries. A total of 40,654 subject entries were received compared with 34,560 in 2017. There was an increase in the number of candidate entries also with 20,149 entries this year compared with 16,568 entries in 2017.

Mathematics is the largest subject with 13,099 entries, followed by English with 11,050, and Social Studies with 3,517 entries.