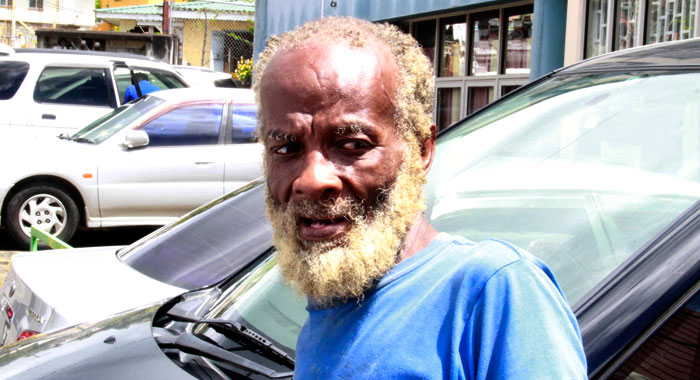 A 68-year-old man with a history of crime has been sent to prison for one week to determine if he can survive there, as he did when he was last jailed in 2002.

“I am going to remand you until the 27th and when you come back, you will tell me how was the experience,” Senior Magistrate Rickie Burnett told goat thief Carl Young at the Kingstown Magistrate’s Court on Tuesday.

The man said he had met the animals in his cabbage patch.

“And I was aggressive and I take them home,” the man said, adding that he was “aggressive” because the animals had eaten his cabbage plants.

He said that he sold the animals, not knowing that he was not supposed to.

He said that when the police came to him, he carried them to “Gibson” telling them that he had sold the animals to him.

“So, I’m asking yo’ please if yo’ could charge me a little fine,” the man said, adding that he wanted to go and protect his home, which had been left open.

He said that he would not steal animals again and would start paying a fine immediately.

Counsel Roderick Jones, who was not involved in the matter, was sitting in the court during the hearing.

The senior magistrate invited him to sit at the bar table.

Young said that he had the animals for a week before selling them.

He said he was trying to get on to the owner of the animal.

The magistrate asked him why he did not take them to the police station.

Young said that he was holding the animal “and if she come — if the owner come, I would give her them back”.

The magistrate noted that Biabou is not the Grenadines, where, in the dry season, because of the scarcity of fodder, there is “let go season” for ruminants.

The magistrate noted the man’s age and told him that he had known he had been doing something wrong.

The magistrate told the man that he is accepting the guilty plea.

In presenting the facts to the court, Prosecutor Sergeant Cornelius Tittle told the court that the virtual complainant, who is 51, is the owner of animals.

On Jan. 30, about 6:30 a.m., the complainant tied two goats on her friend’s land and would intermittently go and move them to different areas on the land.

On Feb. 2, about 10 a.m. the virtual complainant went back and changed the animals.

However, the following day, when she went back, they were not there.

The woman did not report the matter.

However, on Feb. 10, she got word that Young had stolen the animals.

She reported the matter and the defendant was arrested.

He gave police a statement admitting that he took the animals on the Saturday, Feb. 3 and sold them the following day.

The magistrate noted that Young’s last recorded conviction was in 2002, adding that the current charge suggests that he has not been reformed.

The magistrate noted that most of Young’s charges in his younger days were for dishonesty.

The man, however, maintained that he has changed.

“That’s not the example that a 68-year-old should be setting,” the senior magistrate said.

Young told the court that he used to work before, but has been unemployed for about six months.

When asked, the man said that he does not receive Public Assistance.

“Mr. Jones,” the magistrate said, signalling to the lawyer to give his opinion on the matter.

Before counsel Jones could speak, the magistrate said, “This is a hard job to do, but I asked for it, so I ain’t complaining.”

Jones said that while Young was complicit in a crime, he was not the only party and expressed hope that the police complete their investigations and ensure all the persons concerned with the matter are brought before the court.

The lawyer, also said, that he is also concerned that while the accused entered a guilty plea he has not been forthcoming with the truth.

“Yes. He is older than the magistrate. I have book sense, street sense, and sense as well,” the senior magistrate said.

Jones said that he is cognisant of the defendant’s advanced age.

“I have sent older than this to prison,” the magistrate said.

The lawyer said that the accused man has a history of committing similar offences.

The magistrate then said that the man had several convictions for burglary.

Young then told the court that those persons had owed him money so he had gone and stolen things from them.

“I used to commit myself when I was more young then afterwards, I stop.”

“Mr. Young,” the magistrate said. “The last time you went to jail is 16 years ago. Jail has changed up now you know. You can’t mek it. Can you?”

The man then asked for a chance to pay a fine, saying he has a sister in the United States who would help him to pay.

The magistrate said that his position on these types of matters is that once someone is caught he starts from prison.

“A message must be sent.”

Jones said he agrees, adding that he supports the magistrate’s position that a strong message must be sent against praedial larceny.

“And when his picture is put in the newspaper – not that it bothers me — the world will comment about, ‘Look at an old man he sent to prison for two animals.’”

The magistrate, however, said that the commenters would not know the victims’ feelings.

3 replies on “Man, 68, could face jail for stealing goats”