Why Vincentian medical marijuana exports are a pipe dream 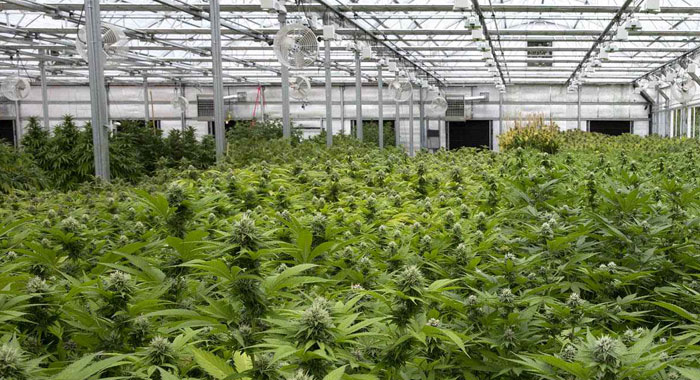 Indoor growth is ideal for medical marijuana because all variables — nutrients, water, temperature, humidity, and light — can be precisely controlled. (Internet photo)

“Barbados ain’t supporting that [medical marijuana]. St. Lucia ain’t going there or Grenada. So if you have to send it to Canada, where Canada has said yes to medical marijuana, how are you going to in-transit [medical marijuana]?” Dr. Ralph E. Gonsalves, Prime Minister of St. Vincent and the Grenadines (SVG), February 17, 2018.

Indoor growth is ideal for medical marijuana because all variables — nutrients, water, temperature, humidity, and light — can be precisely controlled.

If the history of Vincentian export agriculture, free trade, and globalization teaches us anything, it is that the period of mass production for distant overseas markets saw what was its final chapter when the last of a long line of cash crops suffered a quick and painful death with the gradual elimination of preferential banana tariff treatment in Great Britain beginning in 2010, exacerbated by crop disease, low productivity, severe weather events, and poor quality in the years since.

Increasing production of bananas for local and regional sale is still in the cards, but could never compensate for the loss of the huge British market.

But there is a new crop on the near horizon that could theoretically surpass the banana export earnings. That crop is marijuana, one of the oldest, most versatile and adaptive plants known to humankind. Its ability to mutate rapidly and adapt to a variety of growing conditions means that it can be cultivated almost anywhere in the world with at least a three-month outdoor growing season. The plant also does well even in extreme climates when planted indoors under strictly controlled conditions, as occurs with most medical marijuana. Together with its psychoactive properties, this has made cannabis ubiquitous. No wonder it is also called “weed,” highlighting its versatility and stubbornness.

The main attraction for its legal production in SVG, apart from sheer political desperation and the example of the huge profits generated from its illegal production for local and external markets for the past 50 years, are reports that revenue from the global medical cannabis business could reach US$55.8 billion (EC$149 billion) by 2025. Accordingly, the ruling Unity Labour Party had promised to enact legislation in March to legalise and regulate the production of medicinal grade marijuana and its extracts for export to overseas markets.

Is there a reasonable chance that medical marijuana exports could be a real game-changer for SVG’s depressed agricultural sector? Will we soon be exporting medical marijuana products to Canada from Argyle International Airport, as the Prime Minister suggests? Highly unlikely, according to the following news item.

The report shows that as medical marijuana is being legalised around the world — in countries like Czech Republic, Germany, Australia, New Zealand, Greece, Italy, Poland, Denmark, Peru, and Mexico — Canadian producers are more than ready to cash in on the export market.

Canadian expertise in cultivation and greenhouse technology, extraction methods, strains and genetics, along with plain old capitalistic know-how, are also in demand. In addition to exports, Canada’s cannabis companies are also teaming up with local partners to build various facilities in Germany, Denmark and Israel.

Peru and Mexico have also passed legislation to legalize medical marijuana, and Canadian companies are promising further announcements soon regarding sales to and production with local partners in these countries.

New laws are pending in at least a dozen more countries as national regulators and even the World Health Organization recognise legitimate medical uses for a substance which had long been banned under international treaties and local legislation which is partly why recreational marijuana is still illegal in St. Vincent and will be for a long time to come.

Much of the interest in Canadian production is also because Canada is seen as a safe, reliable, and legal source for medical-grade cannabis. SVG, on the other hand, has had production or distribution problems, not only with bananas, but with other export crops as well, including sugar cane, by far its most important cultigen during the post-contact period.

Making medical marijuana legal while restricting the cultivation of recreational weed would only confound the safety and criminality features of both. It is well known, for example, that our weed is sometimes laced with cocaine, a problem that a dual market would only enhance, given the alleged pain relief properties of the latter.

As for the pervasive agrarian pseudo-science myth that Vincy ganja is the best in the world because it is grown in our rich volcanic soils, this is only believed by we chauvinists and a few of our close neighbours (St. Lucia, Barbados, Grenada) whose more open terrains preclude the growing of large stands of illegal weed. Moreover, marijuana of far better quality, potency, and consistency is available from clandestine producers in western North America (British Columbia, Washington State, Oregon, and California), Mexico, and Venezuela (which has been sending quality marijuana at premium prices to St. Vincent in recent years).

Exacerbating these constraints is that St. Vincent island would have to compete with the seven Canadian producers that have been granted licences to export the crop worldwide as well as with the 16 different deep-pocketed marijuana companies listed on the Toronto Stock Exchange, many if not most of whom could also receive export permits in the near future.

As Canada moves towards legal recreational cannabis use in July, the number of licensed growers has swelled to 84, production is skyrocketing, and research into new growing techniques and improved strains developed by top scientists is increasing exponentially. This has placed Canada in a unique role as other nations scramble to find safe and legal supplies of medical and, soon down the road, recreational cannabis.

The same CBC piece quotes Brendan Kennedy, the CEO of Nanaimo-based Tilray, a pioneer in cannabis exports, as saying, “When regulators in other countries are looking for a product, Canada is really the source of the safest product. It’s the safest bet.”

He also mentioned that, “Until it can establish a domestic industry, Germany is importing from Canada,” implying that over the next few years there will be lots more legal producers all over the world, testimony again to the ubiquity of the plant. If these succeed in putting pressure on Canadian producers, what would this do to emerging Vincentian ones that, contrary to fictitious local mythology, have no inherent tropical advantage in growing weed, except wipe them out? Not a safe bet, that.

As a low technology hoe-and-cutlass country with a tiny base of flat land suited for intensive cultivation, poor worker productivity, no environmental advantage, no advanced medical marijuana expertise, little scope for local capital investment, bureaucratic incompetence, and a late start in the ganja race, SVG will have little chance of success unless, of course, it invites Canada to come in and take control of the industry which would translate into the export of nearly all its produce and profits in typical neo-colonial fashion.

Is this what the Comrade has in store for us? Or is this all just another political pipe dream that would quickly go up in smoke?