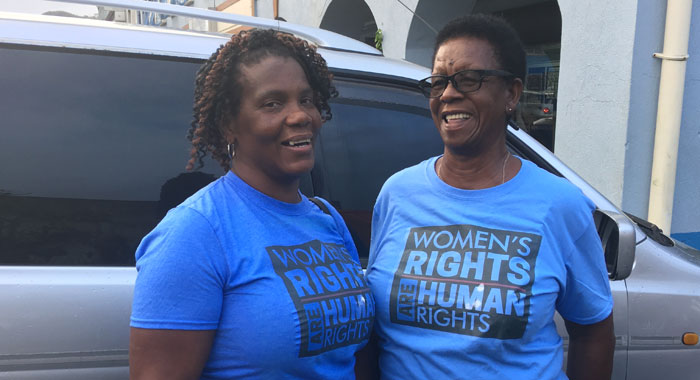 President of the National Council of Women, Beverley Richards, left, and an unidentified woman chat at Heritage Square after the postponement of the march and rally on Friday. (iWN photo)

The march and rally that was scheduled to take place in Kingstown on Friday to highlight women’s rights issues in St. Vincent and the Grenadines was postponed because of rain.

“Unfortunately, due to the inclemency of the weather, a lot of folks called and said they couldn’t make it. A lot of people came around 5 [o’clock] when we had already made the decision to postpone the march,” Beverly Richards, president of the National Council of Women told iWitness News at Heritage Square, where the march was to culminate with a rally.

She said that the event has been postponed to March 8.

The inclement weather that has been affecting St. Vincent and the Grenadines for the past few weeks continued on Friday with light to moderate showers.

Meteorological officials say that the nation received 19.4 millimetres of rain in the 24 hours ending 6 p.m. Friday.

At the time of the 6 p.m. weather report, the temperature was 22.6 degrees Celsius.

iWitness News noted to Richards that some persons have criticised the decision, saying that other persons have protested in even harsher weather for issues that they consider important.

“Well, I’m just the servant in this aspect of it, so there were differences of opinion,” Richards said, telling iWitness News that representatives of the different organisations said that because of the rain they would rather if the event was postponed.

Richards told iWitness News that about 75 persons turned up for the rally.

“Persons came and went away and there were those who were there hanging around… Persons came from Bequia and from the country (Windward) and from the Leeward side to join the march,” Richards said.

She told iWitness News that she is confident that they will attend the event when it is held on March 8.

“I spoke to them individually and we have their support.”

Organisers had planned to march four times around a block in Kingstown, with each lap highlighting a different issue.

“We were [going to march] against domestic violence, rape, sexual assault, sexual abuse and the different aspects of sexual violence against women and girl,” Richards said.

She said that through the event, organisers hope that women would be “more sensitised and get to the understanding that a victim is not a perpetrator and we need to stand by the victims when they are victimised.

“And also we need not violate each other. We ought to be good to one another.”

This would result in generally cloudy and windy with some light to moderate showers and periods of rain, forecasters say.

They urged residents and motorists to continue to exercise caution near rivers, streams and low-lying areas.

A high surf advisory and small craft warning were also issued because of above normal northerly sea swells.

Small craft operators are being advised to exercise caution and beachgoers to stay out of the water.

5 replies on “Women’s rights march postponed because of rain”